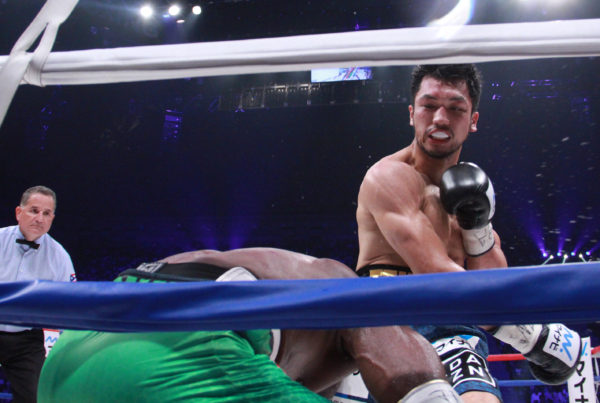 The decision to announce Ryota Murata as just the second boxer ever from Japan to capture a middleweight title seemed to be a mere formality. Instead, the blatant incompetence of judges Gustavo Padilla and Hubert Earle took center stage as a split decision was awarded to Hassan N'Dam N'Jikam in their vacant title fight Saturday evening in Tokyo, Japan.

In defense of the top brass at the World Boxing Association (WBA), the scoring - along with the shoddy officiating performance turned in by eternally worthless referee Luis Pabon - prompted the sanctioning body to declare the middleweights to run it back, as an immediate rematch has already been ordered.

“After judging the bout, my scorecard is 117-110 for Murata," admitted Gilberto Jesus Mendoza, the president of the WBA whose disgust over what took place was already stated through his social media account moments after the decision was announced. "First of all, let me apologize to Ryota Murata, Teiken Promotions and all Japanese boxing fans. There are no words to repair the damage.

"I will demand the Championships Committee to order a direct rematch."

As the decision will likely remain intact despite its controversy, N'Dam (36-2, 21KOs) will remain WBA "Regular" middleweight champion. The France-based Cameroonian - a two-time Olympian for Cameroon including his serving as one of three pro boxers to compete in the 2016 Rio Olympics - was interim titlist but the bout was upgraded to "regular" title after previous claimant Daniel Jacobs fell short versus Gennady Golovkin in their middleweight title consolidation clash this past March in New York City.

The bout marked the first attempt at a major title for Murata (12-1, 9KOs), the 2012 Olympic Gold medalist for Japan who has already soared to celebrity-like status in the pro ranks. That he would get robbed of a decision in his own hosting country is baffling to say the least, particularly in a bout where he scored one clean knockdown of N'Dam and at least two more that were either ruled as slips or missed altogether by Pabón, who is plagued with a poor history of ruining any major prizefight in which he is involved.

Even with the missed knockdowns, most neutral observers had Murata winning no fewer than eight rounds. FightNights,com agreed with Mendoza's unofficial scorecard of 117-110, which matches the tally turned in by veteran official Raul Caiz Sr. At some point, Padilla (116-111) and Earle (115-112) will have to explain to the WBA exactly which fight they were watching to come up with the scores produced at night's end.

Until then, Murata and his team can rest assured that a second chance at a lasting impression is already in the works.

“I am disappointed with the controversy. My goal is to have clear decisions and prove transparency to all boxing fans”, Mendoza stated. "The firm intention of the WBA is to benefit athletes, fans and boxing in general."

The winner of the forthcoming rematch will become one of three mandatory challengers to whomever comes out on top in the September 16 epic showdown between Golovkin and Saul 'Canelo' Alvarez.