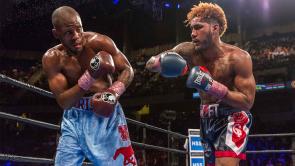 The announcement of the 140-pound showdown between Adrien Broner and Mikey Garcia dominated Thursday's headlines, although the story remains open-ended as details such as the hosting venue and supporting undercard have yet to be revealed.

As we venture into the weekend, some of the pieces to the puzzle appear to be falling into place. Among the lot is the strong possibility of a super welterweight clash between unbeaten champ Jarrett Hurd and former titlist Austin Trout being added to the bill.

Sources have informed FightNights.com that the recently agreed upon title tilt could very well land as the evening's chief support, with both bouts to air live on Showtime.

News of the 154-pound matchup itself was first revealed on an early May edition of "The Morning Punch-In Show With RB & Jae", although when and where it would land remained a mystery. It now seems destined for Brooklyn, as the show is rumored to be held at Barclays Center which has been prominently showcased on Showtime and parent company CBS.

Hurd (20-0, 14KOs) will make the first defense of the title he acquired in a 9th round stoppage of Tony Harrison this past February. His title win aired live in primetime on free-to-air Fox TV on the undercard of Deontay Wilder's stoppage win over Gerald Washington in Birmingham, Alabama. The bout marked Hurd's second knockout on a free-TV network in primetime, having stopped Oscar Molina in 10 rounds last June at Barclays Center live on CBS, in support of Keith Thurman's welterweight title defending victory over Shawn Porter.

Prior to the aforementioned showcase slots, the 26-year old Hurd of Accokeek, Maryland enjoyed a breakout performance on Showtime, stopping previously unbeaten Frank Galarza in the 6th round of their Nov. '15 clash. All told, he will come into his first title defense having halted his last seven opponents.

Trout (30-3, 17KOs) will represent Hurd's most experienced opponent to date, coming in with championship pedigree as well as a groundswell of support should the show land at Barclays Center as he has family and friends in Brooklyn. The 31-year old southpaw from New Mexico served as a 154-pound titlist for more than two years beginning with a 12-round win over Rigoberto Alvarez in Jan. '11.

The reign ended in 'My Brother's Keeper' fashion, as Trout dropped a hotly contested 12-round decision to Rigoberto's far more famous (and talented) brother Saul 'Canelo' Alvarez in their April '13 unification clash. The defeat set the tone for a forgettable 2013 campaign, going 0-2 on the year as he dropped a far more convincing decision to Erislandy Lara later in the year - a bout that happens to mark his lone other appearance at Barclays to date.

Four wins followed before suffering a heartbreaking defeat to Jermall Charlo in his title bid last May, which aired live on Showtime. The bout was his last to date, having campaigned for a busier schedule and issuing an open challenge to Miguel Cotto, whom he defeated in Dec. '12. It marked Cotto's only career loss at Madison Square Garden, with Trout hoping for a rematch once the former four-division world champion first mentioned plans of possibly returning in June.

When it became clear that such a fight would never materialize, Trout instead turned his attention to a shot at a second title reign, at which point Hurd didn't hesitate in answering the call.

All that the fight needed was a confirmed home, and it appears that wish will be granted in the coming days.