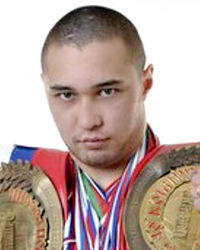 Sergey Lipinets wants to make one thing perfectly clear: he understands why boxing fans are excited over the thought of Terence Crawford and Julius Indongo fighting for all four major belts at stake in the super lightweight division.

He just wants boxing fans to understand that the narrative of all four belts being at stake is, in fact, false.

The unbeaten Kazakh puncher - now based out of Los Angeles - is the mandatory challenger to Indongo, who became a unified titlist following his landslide points win over Ricky Burns earlier this year. Their April unification clash was made with the understanding that the winner would be obligated to next face Lipinets (12-0, 10KOs), with the International Boxing Federation (IBF) demanding such a fight take place no later than this summer.

Because he already requested an exemption in order to pursue the clash with Burns, Indongo (22-0, 11KOs) was all out of options when it came time for the IBF to order negotiations with his top challenger. The unbeaten Namibian - who is now co-promoted by Eddie Hearn, who picked up an option from the Burns fight - suddenly claimed an injury suffered in his last fight, turning over such paperwork to the IBF in filing for a medical exemption.

The matter is still under review by the IBF, although that hasn't seemed to prevent Indongo's team and Top Rank - the longtime promoter for the undefeated two-division champ Crawford (31-0, 22KOs) - from openly discussing plans for a four-belt total unification clash this summer. Hearn took to the British media on Monday in declaring that the fight in fact has a date and site, due to land August 12 in Crawford's hometown of Omaha, Nebraska.

If it fact pans out, Indongo will wind up facing a third consecutive titlist in his opponent's hometown.

What won't happen - if Lipinets' team gets its way - is all four belts being at stake.

"As of now the Indongo team is trying to work out that deal with Crawford based on the fact that Top Rank is telling them that somehow they will get the IBF belt included which is a complete false," Alex Vaysfeld, Lipinet's manager told FightNights.com. "Team Lipinets made an offer to Indongo as well but he hasn't responded yet. The time is running out on them soon."

Lipinets' handlers have requested confirmed copies of Indongo's medical paperwork filed with the IBF, as they've questioned all along the validity of his injury which was first reported on BoxingScene.com with a byline listing someone named Vadim Pushkin as the author.

"To be honest, we've always believed Indongo's "injury" is as phony as the name that appeared on that story," Vaysfeld quipped. "The bottom line is this: any fight with Crawford and Indongo won't happen with the IBF title at stake."

Should the IBF decide to decline Indongo's exemption request, he will be obligated to either next face Lipinets or relinquish his title, leaving him with just the WBA title which would be at stake along with Crawford's WBC, WBO and lineal crowns.

In that event, Lipinets would be first in line to challenge for the vacant title.

"There is a fighter from Japan next after Sergey for the IBF title (Akihiro Kondo)," noted Vaysfeld. "Soon we will see."

Lipinets last fought in March, scoring a 7th round knockout of Clarence Booth in Brooklyn, New York. He took the bout as part of an agreement that allowed Indongo and Burns to meet in their aforementioned title unifier, having already earned his mandatory ranking with a bloody 8th round knockout of Leonardo Zappavigna last December.