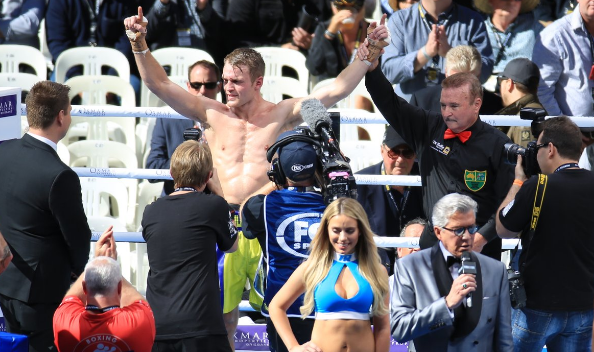 A step up in competition for both fighters. They entered the ring ready with lots of action and a steady pace.

Starting with a good pace and a competitive first round each fighter had their moments landing well and putting together combinations.

David Toussaint started to pick up the heat and land the leather into round two. The action in the round ended with both fighters exchanging a lot of punches and landing well.

Starting round three David Toussaint was landing well to the body. He continued to take control of the fight as Shane Mosley Jr started to take more punishment. Toussaint definitely showed that he was more technically sound as Mosley was not moving his head much and absorbing more punches. The 4th round started with Mosley show more urgency. However as the round continued Toussaint continued to land at will.

Toussaint controlled the rang stinging Mosley with the right and left as he just walked into the punches. Mosley was successful when he initiates exchanges however his timing is off when he tries to counter. This let Toussaint touch him more and control the outside as the fight went into the later rounds. Mosley slowed as the jab was being pushed out instead of snapping. The wear was setting in as Toussaint stay the course.

The fight tapered off into the last round with not much difference in the fight. Mosley walking down Toussaint but not doing much. Toussaint staying patient and landing the combinations. Toussaint was dominating as Mosley desperately needed a knockout to win the fight. In the final round Toussaint would stop and pop Mosley dealing with a cut over his eye.