Castano, Soro Collide At The Crossroads In Search Of Greater Prizes 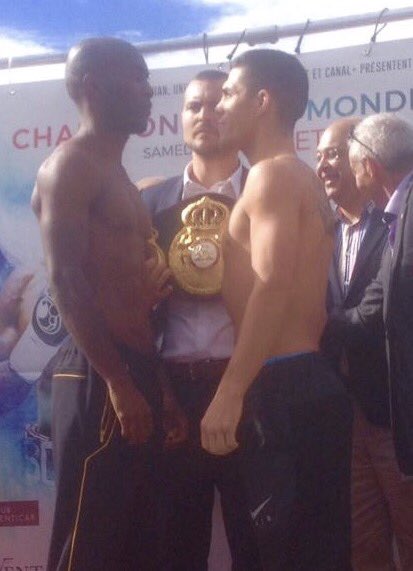 Amidst a busy fight weekend that for a change has attracted mainstream appeal, one of the better matchups among the lot has managed to fly way under the radar. It's a shame, as the interim super welterweight title fight between defending beltholder Brian Castano and top contender Michel Soro is a classic example of boxers taking risks to face each other in the absence of willing competition.

The two will collide Saturday evening at Casino d'Evian in Evain-les-Bains, France, as both boxers easily made weight during Friday's pre-fight weigh-in. Castano–making the trek from Isidro Casanova, Argentina—was just under the divisional limit at 153.9 lbs. Soro was slightly lighter, coming in at fighting fit 153.75 lbs.

While many in the industry will scoff at the interim title on the line—with some writers even catching feelings over the scenario—the stakes make perfect sense considering what awaits the winner. As part of the ongoing efforts of the WBA to reduce its number of titlists, the winner of Saturday's bout will be in prime position to next challenger whomever prevails in the forthcoming showdown between Erislandy Lara and Demetrius Andrade, perhaps the top two super welterweights in the world and whom are tentatively slated to collide later this fall.

That being said, there's no time like the present for the two combatants appearing in a virtual pick-'em matchup this Saturday in France.

Castano (13-0, 10KOs)—whose twin brother Alan also competes as an unbeaten super welterweight—will make the first defense of the interim title he acquired in a 6th round stoppage win over Emmanuel DeJesus last November in his native Argentina. It was his first fight in his home country in 19 months, having spent the gap in between plying his trade in the United States.

He now hits the road for his first title defense, in as dangerous a bout as any boxer in this division can accept.

Soro (30-1-1, 20KOs) has shown a strange way in maintaining any momentum that came of his brilliant two-fight stretch in the spring of 2015. The 29-year old from France by way of Ivory Coast made major headlines in his May '15 4th round knockout of Glen Tapia in his opponent's native New Jersey, a feat that led to a regional title win over Emanuele Blandamara just six weeks later in Italy.

His team has since spent the past couple of years stalling and rejecting several potentially lucrative options that would have placed Soro much higher in the super welterweight landscape. Instead, he was forced to endure a 13-month ring hiatus before returning last July, having since added three more stoppage victories to a current seven-fight knockout stretch.

This particular occasion marks his second attempt at alphabet glory, His previous attempt—a 12-round decision defeat to Zaurbek Baysangurov in May '12—marks his lone career setback, with the only other blemish on his ledger coming in a July '14 draw versus then-unbeaten Antonie Douglas in upstate New York.

Saturday's headliner will air live on Canal+ Sport in France.