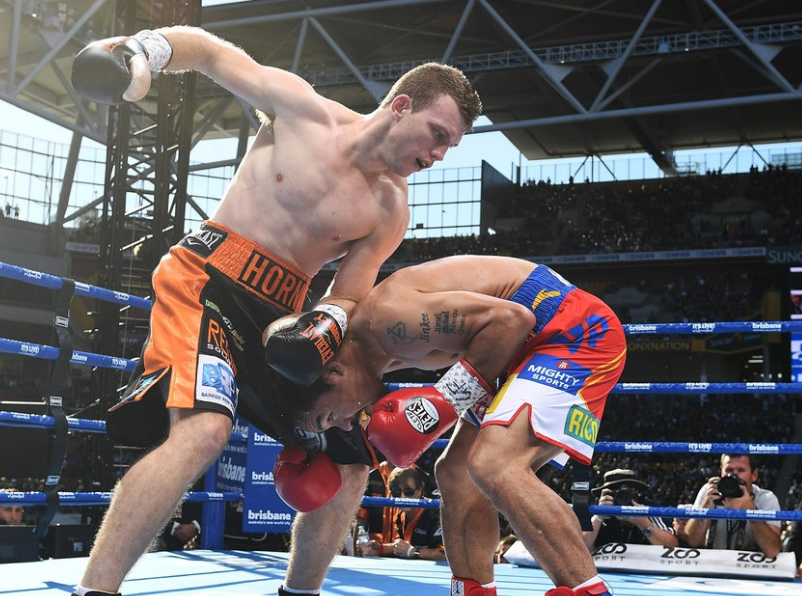 Jeff Horn connected on just 15 percent of his punches and took a serious amount of punishment in the ring Saturday. He absorbed so much leather that the referee nearly stopped the fight at the end of the ninth.

But it didn’t matter as Horn was awarded a unanimous decision victory over Manny Pacquiao before a hometown crowd of 55,000 at Suncorp Stadium in Brisbane, Australia on Saturday night (Sunday morning in Australia).

Horn (17-0-1, 11 KO’s) came out swinging from the opening bell and tried to smother Pacquiao against the ropes. He landed a few shots but was very inaccurate.

By the conclusion of the second round, Horn had already thrown 111 punches per Compubox but landed just 15.

In the third round, Pacquiao, 38, connected with a straight left hand and opened up a cut over Horn’s right eye, which worsened as the fight wore on.

Horn had his moment of the fight in the sixth after an accidental head butt opened a cut on Pacquiao’s hairline and streamed down his face and body. The Aussie took advantage and rocked Pacquiao, which sent the pro-Horn crowd into a frenzy.

Another accidental headbutt cut Pacquiao near his left eye in the seventh round. After a close examination by the ringside doctor and a few boos from the crowd, the fight was allowed to continue.

It appeared Pacquiao was on his way to ending his eight-year knockout dry spell, dating back to his 11th round TKO of Miguel Cotto, in 2009, but couldn’t muster enough to stop Horn, who was battered in a scintillating scene. It was brutal enough that referee Mark Nelson issued a warning that he would halt the fight if Horn didn’t show him he was still game.

“I wanted to keep going on,” Horn said. “I wasn’t really that hurt; I was a little buzzed in that round, but I recovered very quickly.”

Pacquiao was impressed by the resilience of his adversary.

“He was a tough opponent,” the former champion said. “I tried to knock him out in the ninth round, but he survived.”

Pacquiao continued to pursue his man, but the energy and killer instinct that appeared to bring back visions of vintage Manny had disappeared once again, and Horn showed tremendous guts to continue.

In a close final round, both men poured everything on the line, going for the knockout. When the bell rang to conclude the fight, the crowd roared.

While the scoring seemed laughable, Pacquiao was his usual gracious self.

“I respect the judges. He survived that (ninth) round,” but also said the head-butts had an impact on the fight.

“It affected me. A lot of blood came out of my head,” he added.

According to Compubox statistics, Pacquiao connected on 182 of 573 punches (32 percent), while Horn, again, landed 15 percent of his shots, with 92 of 625 attempted blows finding the target.

Although Pacquiao announced at the end of the fight he would exercise his contractual right to a rematch to fight Horn again, retirement seems to be closer than ever before.

This is not his first robbery. He came out on the wrong end of a decision against former world champion Timothy Bradley in one of the worst decisions in modern memory, but at some point, it is time to hang them up.

For Horn, his career just got a lot tougher.