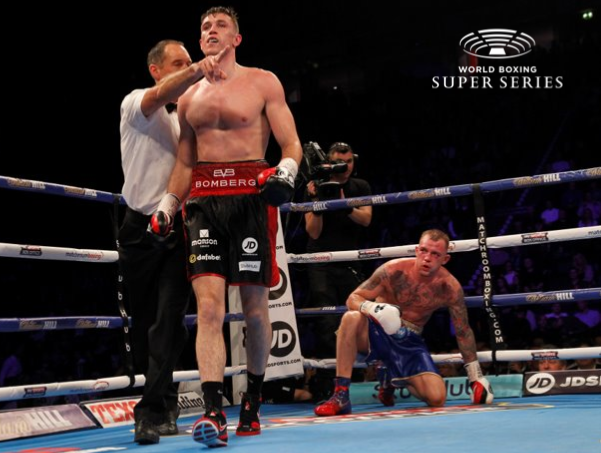 Unbeaten contender Callum Smith has officially signed on for the eight-man tournament, ending weeks of speculation regarding his interest in the series. The talented Brit was in line for a shot at a vacant super middleweight title, but plans for that bout to take place in the opening round of competition fell through when Anthony Dirrell declined an invitation.

“It's been a very frustrating period for Callum but now we have clarity and something he can really get his teeth into," noted Eddie Hearn, Smith's promoter who worked feverishly to secure Smith-Dirrell for the WBSS event. "He is a technically excellent fighter with huge power who we believe has all the attributes to become a World champion - and stay there!”

From the Dirrell fallout at least comes a consolation prize for his first WBSS fight, as Smith—currently the top-ranked contender by the World Boxing Council (WBC) and regarded as the best of his fighting family that includes boxing brothers Stephen, Paul and Liam Smith—will fight for the sanctioning body's Diamond title.

”I am thrilled to participate in the World Boxing Super Series, the Champions League of boxing,” Smith (22-0, 17KOs) said. “What an honor it will be to fight for the WBC Diamond Championship in the quarter-final. But there is so much more at stake than just one belt - the Muhammad Ali Trophy as well as a potential domestic showdown with (super middleweight titlist) George Groves in the final.

"This tournament is very exciting for boxing and I am thrilled to be a part of it. I look forward to travelling to Monaco for the Draft Gala on Saturday and find out who my opponent will be."

As per tournament rules, the top four seeds of each bracket will have the luxury of choosing their opening round opponent during the live Draft Gala which is due to take place Saturday in Monaco. It is highly likely that Smith will be in such position to select his opponent, although there still remain three open slots in the super middleweight field.

"Smith has been one of the hottest prospects in the UK for years and now he gets his chance to showcase his talents on the biggest stage of all,” noted Kalle Sauerland, Chief Boxing Officer for Comosa, the organization responsible for putting together the tournament. “The super-middleweight tournament will be exceptional and we will announce further high-profile names very soon.”

Upon confirmation of the remaining contestants —three more open slots at super middleweight, and one at cruiserweight—attention will turn to Saturday's live draft. The event will air live (11:00pm local time, 5:00pm ET) throughout the globe and will also stream live on WorldBoxingSuperSeries.com.