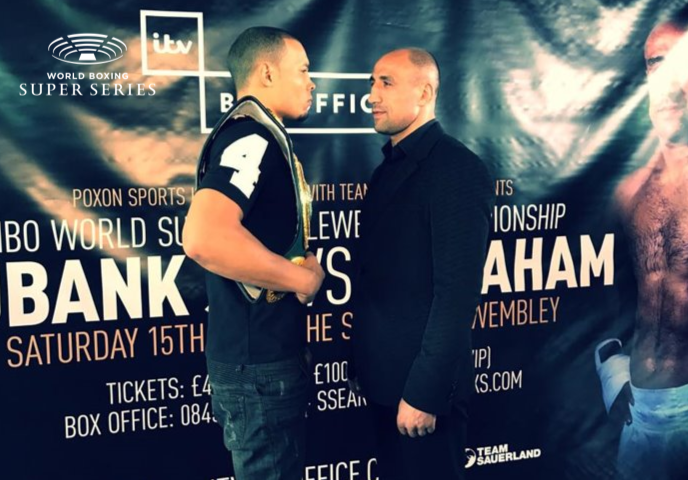 Ask any boxer ahead of a major fight what's in store for the future, and the answer most often given is that the task at hand is the only thing on their mind.

Chris Eubank Jr. and Arthur Abraham can no longer get away with offering that response.

The winner of their July 15 clash in London will be facing yet another tough encounter and a relatively quick turnaround in being designated as the final slot of the World Boxing Super Series 168-pound tournament, event handlers confirmed on Friday. Such placement completes the 16-man field spanning two weight divisions.

Not only is next weekend's victor already destined for the WBSS, but they will already know their next opponent one week ahead with the live Draft Gala due to take place this Saturday in Monaco.

“Eubank versus Abraham is a big fight that just got bigger," notes Kalle Sauerland, Abraham's promoter and also chief boxing officer of Comosa, the organization responsible for presenting the WBSS. "With the winner going into the tournament, the stakes could not be any higher.”

"I look forward to testing myself against the best fighters out there,” said Eubank Jr. (24-1, 19 KOs), whose father Chris Sr. was a former two-division champion and an integral part of the 1990s U.K. boxing boom. “The Muhammad Ali Trophy is a great idea and I am thrilled to participate. It would be great to fight George Groves and to take his title away from him but let´s see what the draw in Monaco brings.

"I am taking one step at a time and right now all my focus is on the fight with Arthur Abraham. With just one win between me and the World Boxing Super Series, I am extremely motivated."

Eubank Jr. carries into his July 15 clash a six-fight win streak since suffering a disappointing 12-round loss to Billy Joe Saunders, who collected a middleweight belt just over a year after their Nov. '14 meet. Meanwhile, a move up in weight has recently come about for the second-generation boxer, having scored a 10th round stoppage of Renold Quinlan this past February in announcing his super middleweight arrival.

His second fight at the weight is arguably his most dangerous career assignment to date—depending on which version of his opponent shows up on fight night.

Abraham (46-5, 30KOs) has enjoyed three title reigns spanning two weight divisions, having made his bones as a middleweight where he made 10 successful defenses from 2005-2009 before moving up in weight. That change of pace was motivated by the launching of Showtime's Super Six World Boxing Classic, where he flew out the gate in scoring a 12th round knockout of Jermain Taylor in the opening round of competition.

The rest of the tournament not only didn't play out as well, but seemingly ended his days as a top player. The Armenia-born, Germany-bred boxer suffered three losses in a span of four fights, including a Super Six-exiting 12-round decision defeat to eventual Super Six winner and divisional king Andre Ward in 2011.

From there came the resurrection—and fall and yet another career resurgence. An Aug. '12 win over Robert Stieglitz began a super middleweight reign and long-standing rivalry that would see the two collaborate in a four-fight series, all with a super middleweight title at stake. Abraham went 3-1 in the series, suffering an injury stoppage loss in March '13 and regaining the belt a year later before finishing off the four-pack with an emphatic 6th round knockout of Stieglitz in their final meet in July '15.

He'd enjoy one more title defense—six in all spanning two super middleweight title reigns—five months later in edging Martin Murray before suffering a 12-round defeat to unbeaten Gilberto Ramirez in a massive letdown of a performance last April. Two wins have followed heading into yet another must-win scenario in his nine lives of a boxing career.

With this win, will come another chance to redeem himself in a tournament setting—not that he's yet thinking about it.

“All my focus is on the difficult and spectacular fight next week at Wembley,” insists Abraham, who fights for the first time in England with his forthcoming clash versus Eubank Jr. "I have to and I will defeat Eubank in a big fight. Then things will take off with the World Boxing Super Series, which really is amazing.

"There are so many great fights in such a short period of time, like blow-by-blow. The boxing fans will really love it. I have been dreaming of having a tournament with the world's best boxers. I will become the world's best super-middleweight. This really is the Champions league of boxing and I am really looking forward to it.”