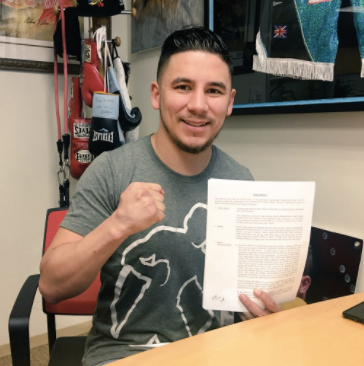 Charles Huerta signed a multi-fight promotional contract with Golden Boy Promotions. Charles Huerta was originally signed back in 2008 and was dropped after a couple of losses. Now back in the stable Huerta will make his next appearance as the main event for an eight-round super featherweight fight on the upcoming Friday, August 10th LA FIGHT CLUB show from the Belasco Theater and airing live on Estrella TV's Boxeo Estelar.

He is coming off a a BIG win against Ivan "Striker" Delgado this past April. Huerta won by a sensational three round knockout after Delgado was down twice in that round and count waived.

Making his professional debut at 21, Huerta has been a long-time fight veteran to the Southern California boxing scene, having fought 22 professional local bouts in his nearly decade-long career. Known for taking on SoCal prospects and contenders, Huerta has squared off with the likes of fan favorites Christopher "S.D. Kid" Martin, Carlos "The Solution" Morales and Ivan "Striker" Delgado in some of his most memorable showdowns.