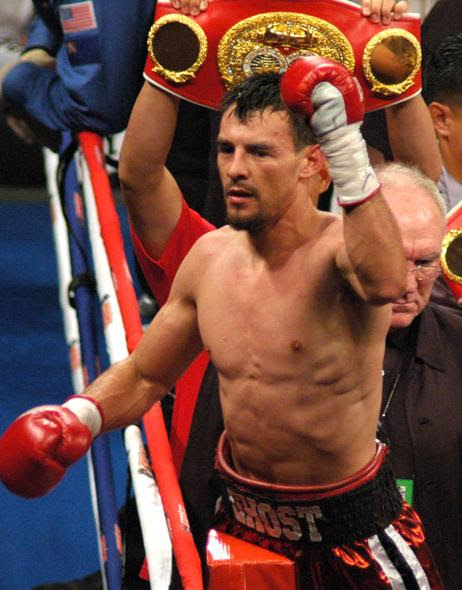 The moment the bell sounded to end his first fight with Gamaliel Diaz in Dec. '05, a then 22-year young Robert Guerrero knew two things: that he just suffered the first loss of his career, and that he was much better than the version that stepped into the ring that evening.

It was a defeat that was emphatically avenged just six months later—and through his first 12 full years as a pro boxer, the only official loss on his ledger. Those days are long gone, and—after racking up five losses in his past six starts—so, too, are his days as a prizefighter.

After giving fans some of the most thrilling fights in boxing, which spanned over sixteen hard fought years, Robert "The Ghost" Guerrero is announcing his retirement.

"First, I want to thank God for allowing me to have a wonderful career," Guerrero (33-6-1, 18KOs) said in a statement released through Mario Serrano, his dedicated press agent for the duration of his 16-year career. "I'm a kid from a small town in Gilroy, California, who made it to the mountain top of the boxing world.

"When I was a young kid growing up, I always believed in myself, but never in my wildest dreams would I have imagined a small-town kid like myself, would be fighting in front of millions of fans."

Guerrero—who truly lived up to the translation of his surname, which means "Warrior" in English—reached that level of stardom in offering extraordinary amounts of courage over the course of his thrilling career. The talented southpaw managed primary title wins at featherweight and super featherweight, while also picking up interim belts at lightweight and welterweight. Regardless of anyone's stance on alphabet belts, Guerrero fought like a champion every step of the way—in and out of the ring.

The first defense of his second tour as a featherweight titlist came at perhaps the most challenging moment of his own personal life. His wife Casey was diagnosed with leukemia less than two weeks before his scheduled Nov. '07 clash with Martin Honorio. As he traveled back and forth between his Gilroy, Calif. hometown and the fight location in Tucson, Ariz., there was legitimate concern as to whether or not Guerrero would even be able to go through with the fight, much less come in fully focused.

Not only did he go through with the fight, but registered one of the most spectacular performances of his career. It came after struggling twice to make weight, coming in more than a pound heavy, undoubtedly affected by the non-stop travel at a time when boxers normally shed those last few ounces, or pounds. Inspired by his wife's bravery, Guerrero blasted out Honorio less than a minute into their Showtime-televised co-feature battle.

He'd make just one more title defense before a much-needed move up in weight, but not challenging for the 130-pound title until Aug. '09, soundly outpointing Malcolm Klassen to become a two-division champ.

The reign was one-and-done, vacating the title and taking a break from the sport to spend time with a recovering Casey, whose warrior heart was equally on display in her battle versus cancer before conquering the ailment for good in 2012.

By then, Guerrero had added two more titles to his ledger along with wins over Joel Casamayor, Michael Katsidis, Selcuk Aydin and—in perhaps his last great moment in the sun—a convincing 12-round victory over former welterweight champ in their fun Nov. '12 battle.

"I was blessed to win multiple world titles in four-divisions," reflects a forever grateful Guerrero. "A boxer's career is a long and tough road. Many tears were shed, lots of blood, and tons of sweat. Many miles were traveled, thousands of rounds sparred, none were easy and nothing was ever given to me. I earned everything I got the old fashion way. I never ducked anyone and fought the best fighters in the world. I fought my way through every obstacle to make sure my fans enjoyed every second, of every round, of my fights."

"I competed at super-bantamweight (122 lbs.) and won world titles across multiple weight classes, closing my career at welterweight (147 lbs.), fighting the big guys 25 pounds heavier. A good friend always told me I was God's warrior, born to fight. I enjoyed every minute of every war. I represented my Lord and Savior Jesus Christ with the bible verse Acts 2:38 on my trunks. If I reached one person and brought that person closer to Christ, then it was all worth it."

While the final four years of his career proved tough on his overall run, Guerrero was also provided with a much bigger stage on which to display his courageous fighting heart. Losses to Floyd Mayweather, Keith Thurman and Danny Garcia were no doubt tough to watch for his fans, but came on—in order—a high-profile Pay-Per-View main event, and in primetime on free-to-air NBC and Fox, respectively. His March '15 clash with Thurman served as the very first main event under adviser Al Haymon's Premier Boxing Champions circuit, while his Jan. '16 clash served as the maiden headliner for the very PBC-on-Fox series that also saw his final career performance, suffering five knockdowns versus Figueroa last weekend in his lone appearance in New York.

Still, there's not a minute of his career which he regrets as he long ago learned to take the bad with all of the good that came of his run in the pro ranks.

"I want to thank some very important people in my career starting with the most important person, my wife Casey, who has been with me every step of the way, my soul mate, my sweetheart, the one and only love of my life. My father/trainer Ruben Guerrero Sr. He's the one who started it all and made me the man I am today, and the champion I was in the ring. He's one of the best trainers in the world and I hope to be working side by side with him in the future. My mother Marcy Guerrero for being a great mother and supporter. My co-manager Bob Santos for all the sacrifices he made to get me to the top...I will always remember the early days when we made the most with very liitle. He always had my back and looked out for me like I was his brother. His wife Diane Santos who did a lot of secretarial work for me during my whole career. Both my grandparents on Martinez and Guerrero sides for believing in me. My brother's Sammy, Ruben Jr., Victor, Randy and especially Eric, who has been with me my whole career, my shadow every step of the way, my right-hand man. My mother and father in-law, Shelly and Cary O'neal. My cutman Ruben Gomez. My good friends, Pastor Mark Wilson, Dave Castro, Pastor Chris Avila, John Mersho, and Albert Guarado. My uncle Russel Sr., Russel Jr., Uncle Ricky, Hector Catano and Greg Amundson. I want to thank my co-manager Luis Decubas Jr. for taking my career to the next level. Santos and Decubas Jr. are more than managers, they are family to me. My publicist Mario Serrano, who has also been with me the whole ride, he is also family to me. All the fans and the community who stuck by my side when my wife was battling cancer...I will never forget the love you showed. There are so many people who have helped me, if I leave anyone off, thank you for everything."

"In closing, I want to thank the most special man I've ever met in my boxing career, and possibly lifetime, a man who always does what's best for the fighter, a man who has changed the sport of boxing, a man who has helped bless me and my family with a great life, and that person is my advisor Al Haymon. Not only is Al Haymon a spectacular advisor, he is a wonderful human being as well, a great man, and someone who cares. In a sport where most managers, promoters, and trainers turn their back on a fighter, when they no longer can perform, or are no longer beneficial to their interest, Haymon stands tall. Love and loyalty is tough to find in the boxing game, but for any boxer looking for it, you don't have to look far, reach out to Al Haymon. I want to thank everyone, the fans included. I hope you guys appreciated the guts and glory I left in the ring. God bless you all."