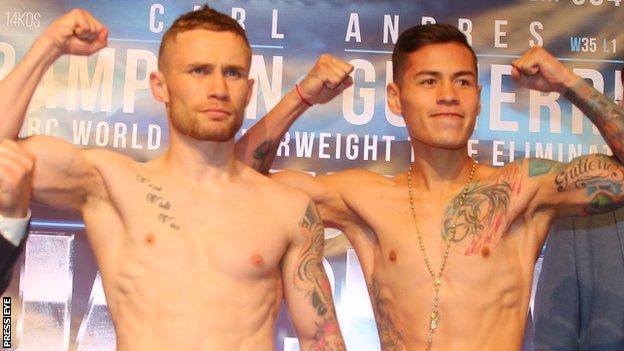 Carl Frampton fight off after Andres Gutierrez is injured slipping in shower. Gutierrez, 24, suffered facial cuts, bruising to the head and broke two teeth in the accident. "He slipped in the shower, smashed his face, the guy is concussed. He has a deep gash on his chin, his nose, lost two of his teeth." Frampton's manager Barry McGuigan said.

Cyclone Promotions has announced that the event scheduled for today, Saturday 29th July, has been canceled. It is hoped that the event will be re-scheduled but ticket holders are advised to retain their tickets and contact point of purchase for further information.

At today’s weigh-in, Frampton missed the 126 pound limit, so therefore the bout was no longer an official WBC featherweight eliminator. Gutierrez could have still become mandatory challenger for WBC champion Gary Russell with a win had he not been injured.