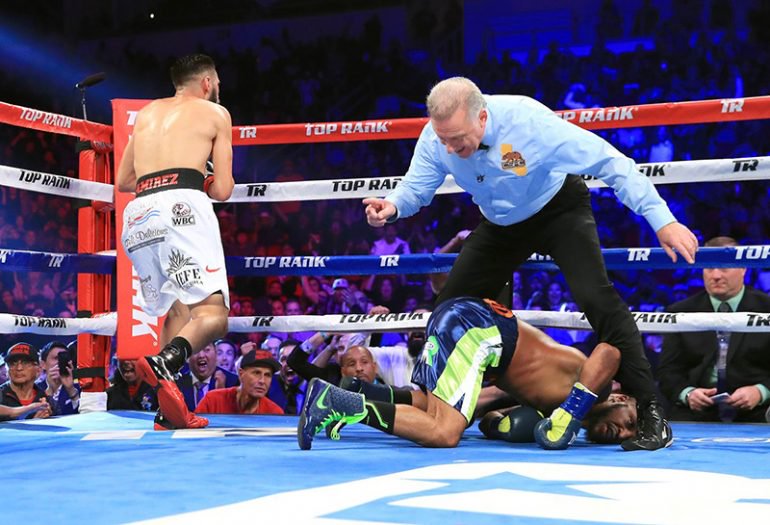 It was a clash of unbeaten junior welterweight world title contenders, and it was the hometown kid who came through with a dominating performance. Jose Ramirez dropped Mike Reed and eventually stopped him in a ruthless display before an exuberant crowd of 13,838 at Save Mart Center in Fresno, California, on a Top Rank on ESPN card.

Ramirez, a 2012 U.S. Olympian, has spoken out in favor of farmworkers’ rights, and his work on behalf of their struggle has made him a hero to those in the region.

Ramirez was on Reed from the opening bell. He walked the southpaw down with multiple left hooks to the body.

Ramirez picked it up a notch in the second and stunned Reed with a right hand that sent him into the ropes. Smelling blood, Ramirez unloaded a combination, and Reed fell face-first to the canvas.

Reed went down again, but referee Jack Reiss ruled it a slip. However, his legs were still not underneath him, and he was taking heavy punches on the ropes. Erring on the side of safety, Reiss stopped the action at one minute, 43 seconds.

Reed, who was not firing back before the stoppage, acknowledged he was hurt but was not pleased with the stoppage.

“He hurt me with a body shot. It was a real big punch, but the fight never should have been stopped,” Reed said. “The fight should have continued.”

On Twitter, Reed added “Don’t think it should’ve been stopped, but also [I] shouldn’t have been in that position, so it’s my fault. Good fight to Jose. No excuses. I WILL BE BACK.”

According to Compubox punch statistics, Ramirez connected on 46 percent of his punches (64 of 138) while Reed was landed 15 percent of his blows (12 of 78).