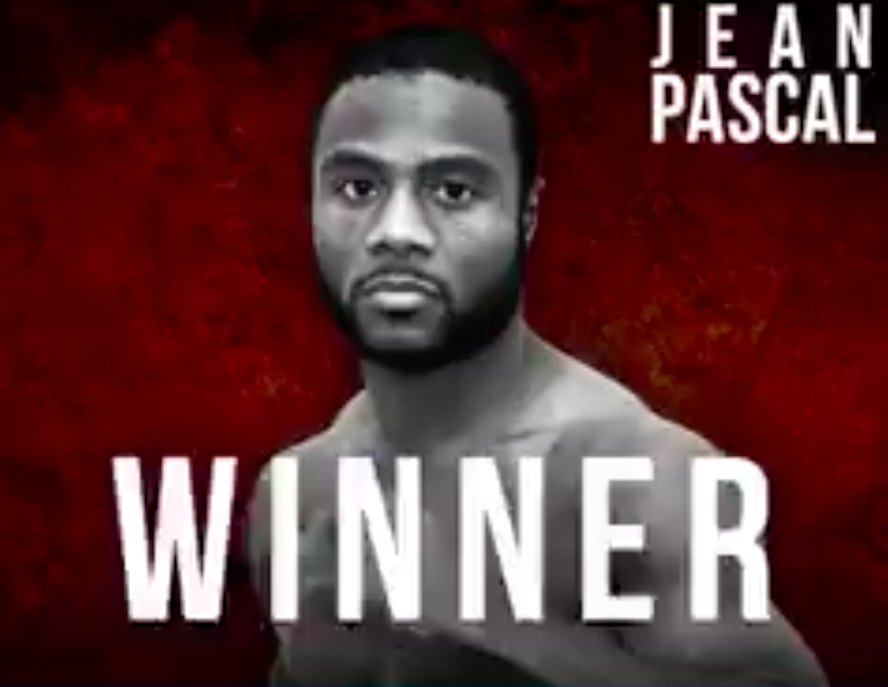 All that Jean Pascal wanted from the night was to go out on top.

Few believed his wish would come true, but the former World light heavyweight champion not only achieved it but did so in hostile territory with a 6th round stoppage of Ahmed Elbiali. A flurry of shots forced the camp of the unbeaten Miami-based prospect to wave the surrender flag in forcing an end to the bout at 2:06 of round six.

The night didn't quite begin that way, in fact going according to plan for Elbiali and the oddsmakers as Pascal struggled to develop into a rhythm. The momentum didn't carry over very far, as Pascal was able to seize control in round two, never looking back.

"It was a beautiful fight," Pascal (32-5-1, 19KOs) said after the fight. "I knew it would be my last one and I wanted to make a statement against a young, unbeaten fighter.

"It went basically as I expected, a couple of difficult moments but I was able to do everything I wanted."

Most of the damage came courtesy of Pascal's potent right hand, but it was a left hook that provided the first scare into the previously unbeaten Elbiali which came in round two. A right hand shot followed, just as it did again in round three after a brief Elbiali rally.

Elbiali's last stand appeared to come in round five, when he had Pascal momentarily stunned but lacked either the stamina or the ring smarts and experience to capitalize on the sequence. Pascal came back like gangbusters in round six, drilling Elbiali (16-1, 13KOs) with a string of right hand shots midway through the frame. More damage was well on its way, only for Elbiali's corner to climb on the ring apron with white towel in tow, alerting referee Telis Assemenios to end what was in no uncertain terms the final fight of Pascal's well-achieved career.

"This is absolutely the last fight of my career," insisted Pascal, who held the World light heavyweight champion for nearly a year from Aug. '10-May '11. His career never quite recovered beyond that point aside from a win over Lucian Bute in the most lucrative in-country matchup in the history of Canada boxing.

It led to a return near the top of the light heavyweight division, but falling well short in a pair of stoppage losses to Sergey Kovalev in 2015 and 2016. A valiant-in-defeat effort versus Eleider Alvarez serves as the last time he'll ever appear in a ring in his home country.

Friday's performance is apparently the last time he'll ever lace 'em up for a pro fight.

"I've sold hundreds of thousands of tickets in Canada, I'm very proud of that," states Pascal. "People ask I want to end it here (in Miami) and not Canada, but I am very satisfied with everything I've accomplished and to beat an undefeated fighter is a perfect way to end my career."