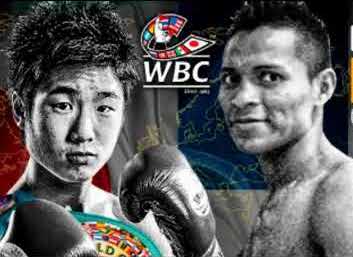 The anime character after whom Ken Shiro is named is shaped around the late, legendary Bruce Lee and fictional film hero Mad Max. It's a fitting tribute, as the 25-year old from Kyoto, Japan—whose full birth name is Kenshiro Terachi—is on the verge of transforming from a cult favorite to a boxing superhero.

One of boxing's better breakout stories of 2017 wrapped up in grand fashion, as Shiro scored a 4th round knockout of Gilberto Pedroza for the second defense of his junior flyweight title Saturday evening in Yokohoma, Japan.

A pair of knockdowns prompted the stoppage at 1:12 of round four.

The bout began at a deliberate, feel-'em-out pace, with Panama's Pedroza—fighting for his first major title—attempting to initiate the action in round two. The diminutive challenger was unsuccessful in his efforts, as Shiro—who at just 5'4 1/2" still enjoyed significant height and reach advantages over his 5'2" foe—wisely boxed from the outside while waiting for the perfect moment to intensify his efforts.

That time came in round four, and was over almost as quickly as it began.

A right hand shot from the defending titlist left Pedroza dazed, leaving him vulnerable for an ensuing three punch volley that forced him to take a knee. Shiro calmly waited in a neutral corner as the challenger beat the count, then exploded in his efforts to finish off his wounded prey. A pair of body shots proved too damaging for Pedroza, who folded to the canvas as referee Laurence Cole halted the contest without issuing a count.

Pedroza suffers his second stoppage loss—both coming on the road—which serve as bookends for a seven-fight win streak that came to a close on Saturday. His record falls to 18-4-2 (8KOs) as he returns home empty handed.

As for Shiro, his arrival comes right on time as the 108-pound division is suddenly bursting with potential. His record improves to 12-0 (6KOs) with the win, his third in a 2017 campaign that saw him emerge as the latest boxing star in a thriving Japan market. His year began with a majority decision win over Ganigan Lopez to win the junior flyweight title in May.

Shiro truly made a name for himself after edging former two-time champ Pedro Guevara in his first title defense this past October, pleading his case as the leading junior flyweight in the world. His competition will come in the other major New Year's Eve-themed show this weekend in Japan, when countryman Ryoichi Taguchi and Philippines' Milan Melindo collide in a unification bout Sunday evening in Tokyo, Japan.

The Taguchi-Melindo clash serves as its own headliner while Shiro's latest feat came in chief support to Naoya Inoue's knockout win over Yoan Boyeaux. Chances are, his next ring appearance will come in a main event, as his career transitions to all-action superhero.