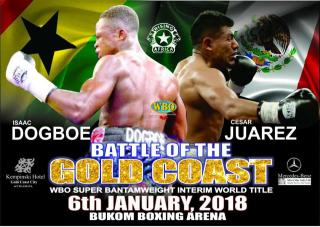 The first (interim) title fight of 2018 is officially set, as Isaac Dogboe and Cesar Juarez easily made weight for their super bantamweight clash Saturday evening at Bukom Boxing Arena in Accra, Ghana.

Both boxers easily came within the division's 122-pound limit. Dogboe (17-0, 11KOs) tipped the scales at a chiseled 121.4 pounds, while Juarez was a trim and fit 121.6 during Friday's pre-fight weigh-in. An intense staredown ensued before the combatants were encouraged by Juarez's adviser Sean Gibbons to turn and face the media and crowd on hand for the session.

Dogboe enters the first title fight of his career, which comes in his hosting nation. Despite boasting home ring advantage, the 23-year old comes in having fought just once in 2017—a 6th round stoppage of Javier Chacon last July—while waiting for a title fight to materialize. Still, his slow crawl was preceded by a brisk advancement from his 2014 debut to title contention.

Conversely, this is hardly Juarez' first time at the dance. The scrappy slugger from Mexico came up short in his lone other title bid, but gave it a hell of a run in a 12-round points loss to Nonito Donaire. Their Dec. '15 slugfest was the last true entrant in the 2015 Fight of the Year race, throwing down in an all-out war that saw Juarez decked twice in the 4th round before storming back to give Donaire all that he could handle, to the delight of the crowd on hand in San Juan, Puerto Rico.

His next outing suggested some wear-and-tear suffered from the loss to Donaire, dropping a split decision to Giovanni Delgado just three months later. The 26-year old quickly rebounded with an 8th round knockout of Albert Pagara in July '16, a feat that sparked a current three-fight win streak.

The winner of Saturday's affair—which will air via same-day tape delay on beIn Sport Español (11pm ET/PT)—will become the mandatory challenger for the super bantamweight title held by unbeaten Jessie Magdaleno who defends against an opponent to be named on March 10 in Carson, California.