Wilder At Lightest Weight Since 2009 For Title Defense Versus Ortiz 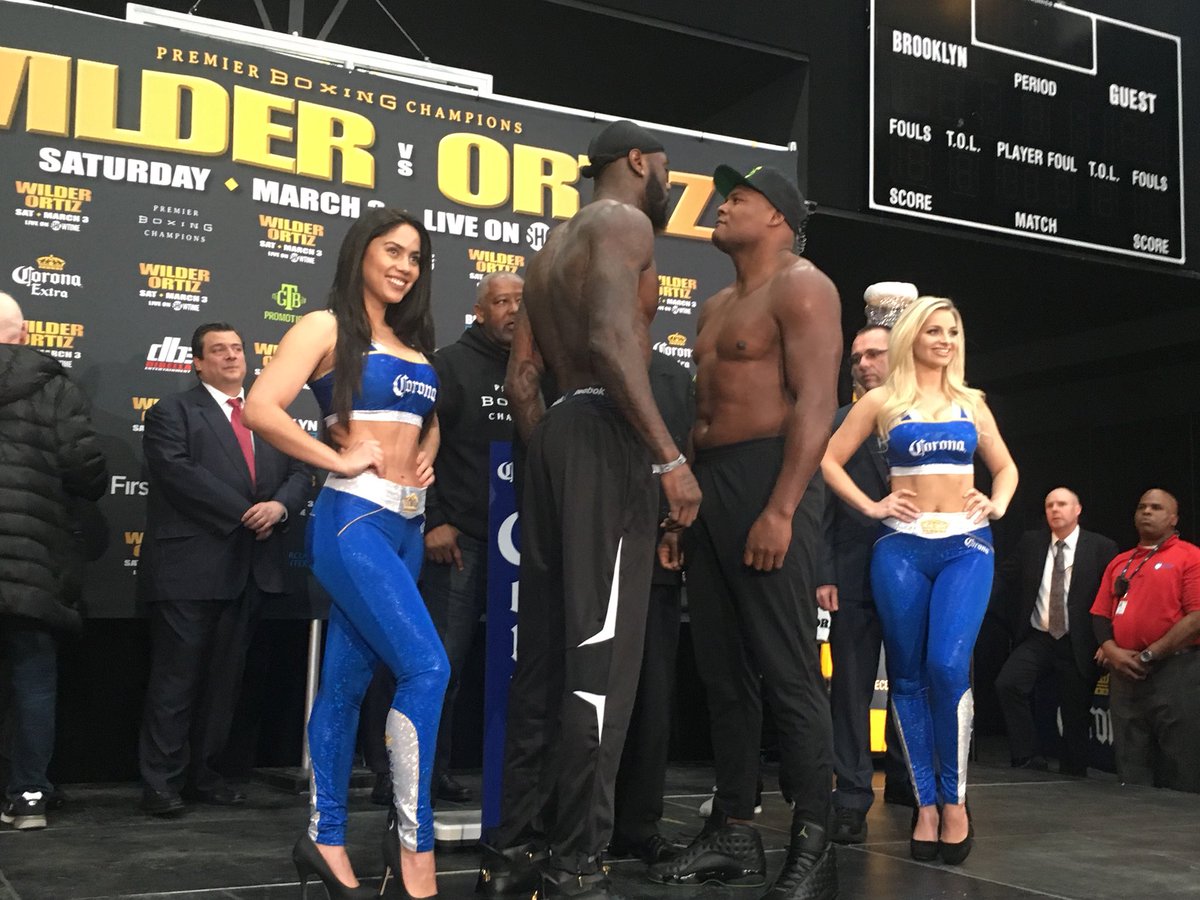 He's 27 pounds lighter than his challenger and at his lowest weight since 2009, but don't mistake that for Deontay Wilder being light in the ass.

The unbeaten fighting pride of Tuscaloosa, Alabama was a shockingly lean 214.75 pounds for his heavyweight title defense versus Luis Ortiz, who looked relatively soft in comparison at 241.25 pounds for his first official title challenge. Their clash takes place this weekend at Barclays Center in Brooklyn, New York (Saturday, SHOWTIME, 9:00pm ET).

For Wilder (39-0, 38KOs), it's his lightest weight since clocking in at 214.5 pounds for his third pro fight nine years ago almost to the day in March '09. As has been the case throughout most of his career, his challenger comes in as the far heavier boxer—but his unbeaten record is as clear an indicator that heavier can hardly qualify as an advantage of any kind.

"Weight don't mean nothing," Wilder told Showtime's Steve Farhood following Friday's weigh-in. "I'd rather be the part than look the part (of a heavyweight)."

Wilder has certainly looked the part throughout his career, in fact dating back to his Bronze medal earning effort during the 2008 Beijing Olympics. The 6'7" heavyweight spared the 2008 United States boxing team the embarrassment of being shut out at the medal table with his feat, despite being the least experienced member of the squad.

Less than seven years later, he brought a portion of the heavyweight crown back to the U.S. In beating Bermane Stiverne in their Jan. '15 clash, Wilder became the first American heavyweight since Shannon Briggs in 2007 to hold a title, of which he attempts his seventh defense.

The win over Stiverne was his only pro fight to go the distance, although Wilder was able to claim to have knocked out every opponent he's faced after laying out the Haitian-Canadian in their one-round rematch last November. The final sequence—Stiverne on collapsed knees under the ropes—became the most meme-able boxing event of the year, while also keeping Wilder near the top of the heavyweight rankings.

All talks in the land of boxing's most storied division have since turned to a desired showdown with fellow unbeaten titlist Anthony Joshua in an epic clash that would re-establish World heavyweight championship lineage. While Joshua will face Joseph Parker in a title unification clash later this month, Wilder has his own task at hand to first tend to, as he faces arguably the best boxer of a pro career now in its 10th year.

Ortiz (28-0, 24KOs) had a chance to fight for the title versus Wilder last November but instead fell prey to his second failed drug test. Three years after testing positive for a banned substance in a 1st round knockout win-turned-No-Contest versus Lateef Kayode, the Cuban southpaw—who turns 40 later this month—once again came up on the naughty list during pre-fight testing last September.

The lingering issue came down to a clerical error, as his team foolishly failed to disclose blood pressure medication he was currently taking, containing the very steroids that came up in his test. Ortiz was spared the embarrassment of a second career suspension, but was scratched from the November show as he was replaced by Stiverne.

As a result, he went nearly all of 2107 without a fight until returning last December in a two-round blitzing of Daniel Martz. The fight was less remembered for the in-ring action than it was for the in-ring aftermath, when Wilder—who was ringside and also on the FS1 panel as a guest commentator—was ushered into the ring after Ortiz leaned over the ropes to call him out. The sequence developed into a comical screaming match between two boxers who don't speak the other's native language (Ortiz understands some English but only speaks Spanish), but the scripted event laid the foundation for this weekend's rescheduled heavyweight clash.

In the televised opener, Andre Dirrell and Jose Uzcategui meet in a rematch to their infamous interim title fight last May which ended in an arrest warrant being issued and a filed lawsuit that is still pending. Dirrell (26-2, 15KOs) weighed 167.75 pounds for his first defense of his interim title, while Uzcategui checked in a lean and mean 166 pounds, two full pounds below the 168 lb. divisional mark.

Dirrell was hailed the winner by disqualification in their first meet after Uzcategui was ruled to have knocked him out with a punch that came after the bell to end the eighth round. The incident lit a fire within Leon Lawson Jr, Dirrell's trainer and uncle who charged across the ring to take a swing at a defenseless Uzcategui. The disgraced cornerman eventually surrendered to authorities following an arrest warrant, with charges dropped down to misdemeanor assault.

Neither boxer has since fought, with Dirrell having even contemplated retirement in the aftermath. The 2004 Olympic Bronze medalist from Flint, Michigan—whose medal round loss came to current unbeaten and unified middleweight titlist Gennady Golovkin—has since resurfaced with trainer Virgil Hunter, best known for his boxing lifelong work with Andre Ward.