Is the Octagon Next? Conor McGregor v. Floyd Mayweather II 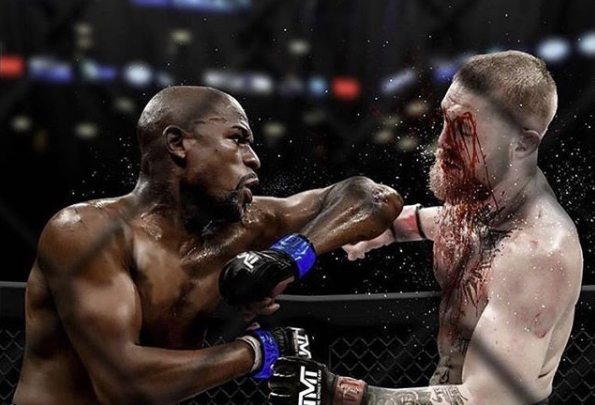 Conor McGregor vs. Floyd Mayweather Jr. was fun while it lasted. As it turns out, one of the craziest pre-fight hype trains lasted over a full calendar year. The rumors popped up during the summer in 2016 and boxing and MMA fans didn’t get a taste of what they’d been promised until August of 2017. Ultimately, it was a dish probably better left unserved. There’s no denying the hype around this huge inter-sport bout was interesting. There aren’t any fighters who offer more showmanship than McGregor or Mayweather, after all. However, in the end, McGregor vs. Mayweather was a bit of a farce. Any true fan of boxing could tell you that, and that’s why all this talk of a rematch is met with - at best - hesitance. Still, for what it was, an argument can be made that we may never see a bigger fight. Unless, of course, these two headcases do it all again. If they do, it needs to happen in the Octagon at an UFC event, though. Here’s three reasons why:

I’m not sure I need to remind you of this, but not only is McGregor not an experienced professional boxer, but he really isn’t one in any regard. He dropped some nice licks on Mayweather during their first showdown, but people made fun of him during his sparring sessions and his unorthodox style is better served in MMA. That really isn’t McGregor’s fault, of course. Nobody was saying he was a better boxer than Mayweather in the first place or that just because the two would be boxing, he needed to conform to what many envision elite boxing to be. McGregor is an elite fighter to his core and he certainly boasted high level striking chops in the UFC. He just isn’t a trained boxer and it was always silly to think one year of switching up his strategy could turn him into one. In the end, that won’t change over the course of another year. McGregor vs. Mayweather II could still happen and it very well could go down once again in a ring. It just probably shouldn’t.

There’s No Value in a Boxing Rematch

One massive reason why any hypothetical rematch shouldn’t happen in a boxing ring again is the betting aspect. Bettors already saw Mayweather easily dispatch a woefully inferior boxing talent in the first meeting and that leaves little to the imagination for a second bout. To instill actual value in this fight, you need to generate natural interest from people that want to purchase an expensive PPV package and you need to create some type of doubt from a betting perspective. After a sorry effort the first time around, it’s going to be very difficult to convince die hard boxing fans that a second fight will be any better or end any differently. From a betting angle, a boxing rematch ends the same way, too. Hey, maybe The Notorious trains harder and ups his game to the point where he lasts a full 12 rounds. However, Mayweather has never been knocked out, nor has he even been defeated in his entire career. Neither are suddenly going to happen against a non-boxer that Mayweather has now schooled already. Suffice to say, Mayweather would enter as a much bigger favorite than he did the first time around and the only way to make any actual money on this fight would be to go hard after McGregor. That’s a losing bet, though, so the betting interest in general would figure to be pretty weak.

McGregor Can Win a MMA Match

McGregor isn’t a boxer and a boxing rematch would yield the same results, one way or another.

That gives you two clear reasons why any discussed rematch needs to be something different entirely, and that’ precisely why this talk of a crazy MMA clash actually could have some legs to it. The main reason why it hasn’t been killed yet? That’s a fight The Notorious can actually win. In fact, there is a very strong argument McGregor would win and it’s why the top boxing and UFC betting sites already peg him as the easy favorite. The beauty here is there is still some mystique in this altered bout, just like there was in the first showdown. Before Mayweather proved he was the superior boxer in his own world, there was at least some skepticism. There were some people that bet on McGregor and hoped he’d shock the world (and make the money) or they simply just believed he’d finally deliver that one big jaw-breaking punch Mayweather couldn’t survive. That could apply to Conor McGregor vs. Floyd Mayweather II as well. Mayweather would be the obvious underdog, but if his defense and boxing talents got him an easy win the first time around, they certainly could possibly score him a 2-0 record against The Notorious. Still, there are things Mayweather would have to take into account. For one, the setting is entirely different. The reffing is different and the fact that you’re fighting in a cage makes it different. There is also the fact that McGregor can incorporate a variety of punches he wouldn’t be able to in boxing, he can toss in leg kicks and takedowns, he can end the fight via submission and his gloves would be thinner and allow for more violent contact. I’m not saying McGregor would for sure win or that Mayweather wouldn’t have a chance. Much like the first time around, that might be silly to do. Still, a second meeting could be interesting. It just needs to be a different fight and in a different setting. That’s why it’s Octagon or bust for McGregor vs. Mayweather II.