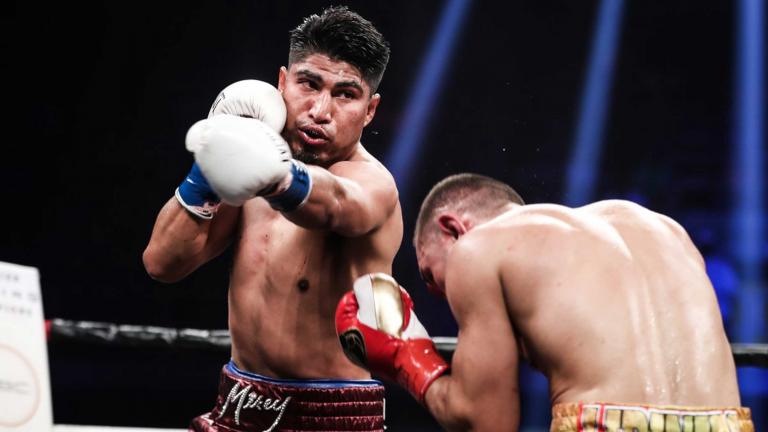 Considering its lead-in was a first-run movie and not a major college basketball divisional title game, the Nielsen ratings for Mikey Garcia's title win over Sergey Lipinets on March 10 left the Showtime staff perfectly satisfied.

In joining Manny Pacquiao and Juan Manuel Marquez as the only boxers in history to win world titles at featherweight, super featherweight, lightweight and super lightweight, Garcia's special night at the office was enjoyed by an average of 618,000 viewers according to Nielsen Media Research. The telecast—which aired live from Freeman Coliseum in San Antonio, Texas—peaked at 689,000 viewers.

Garcia was able to drop Lipinets for the first time as a pro or amateur in addition to handing the Kazakh puncher his first defeat, winning by scores of 117-110 (twice) and 116-111 in a highly competitive slugfest.

The cynic will point out that Garcia's first fight since his 12-round win over former four-division titlist Adrien Broner marked a 30% drop in ratings from that night. The realist will take note that Garcia was the lone star among Saturday's doubleheader, along with the show competing with a live offering of Top Rank Boxing on ESPN, with the main events and co-features both running head-to-head all evening.

Unlike the ESPN telecast—which dipped in viewership from the start of the telecast through the main event—Showtime's audience steadily increased as the night progressed. The doubleheader kicked off with Kyril Relikh avenging last spring's controversial loss to Rances Barthelemy, scoring a landslide points win to claim a separate version of the 140-pound crown. Their bout averaged 489,000 viewers, peaking at 544,000 viewers.

The average viewership for Relikh-Barthelemy II was a 16% increase from the show's lead-in, a first-time showing of "Patriots Day", a 2016 film based on the tragic bombing at the 2013 Boston Marathon.

Saturday's results come on the heels of the network scoring its highest rating in more than three years, Deontay Wilder's knockout win over Luis Ortiz in their battle of unbeaten heavyweights averaged nearly 1.1 million viewers, the most watched Showtime main event since Wilder first won the heavyweight title in a 12-round nod over Bermane Stiverne in Jan. '15.