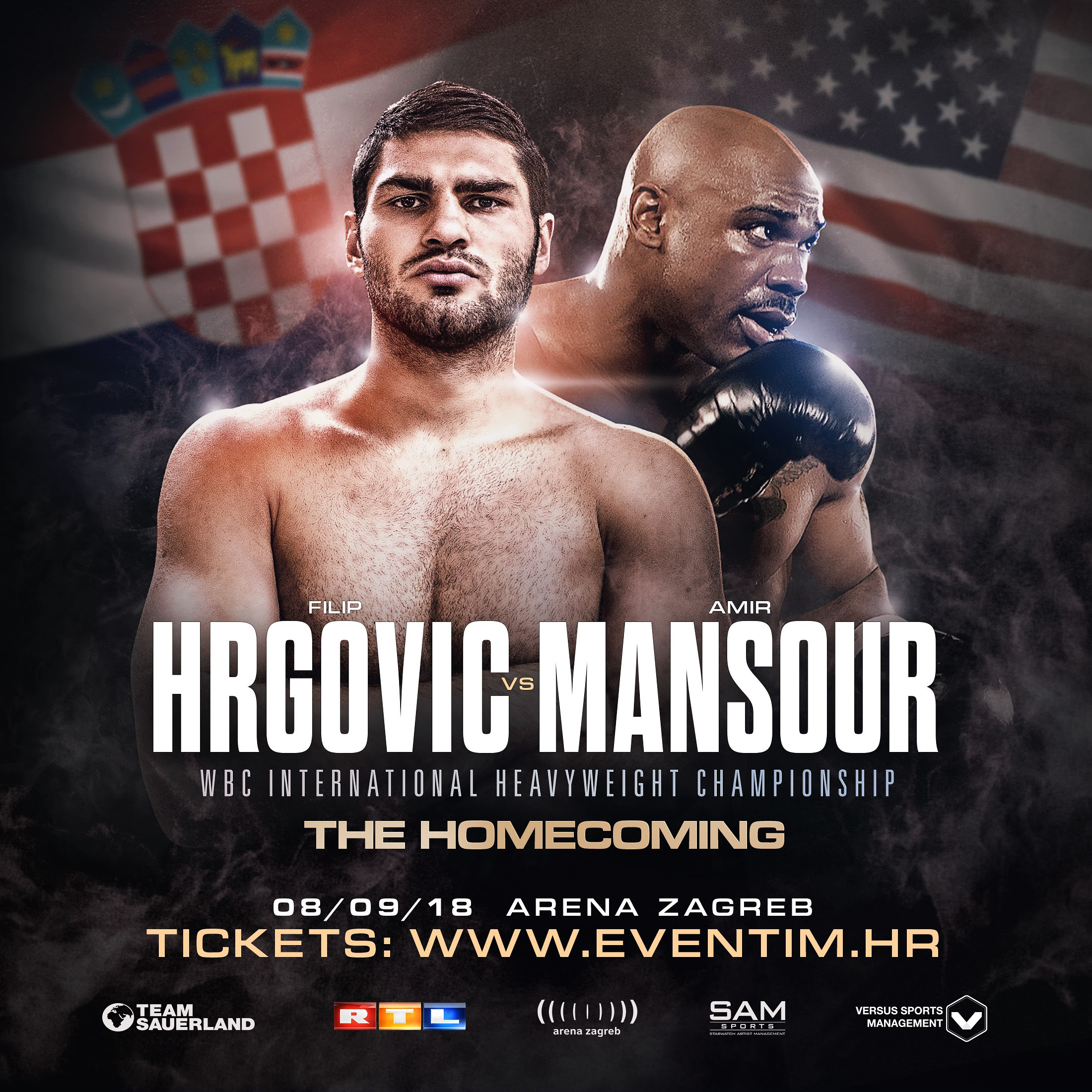 Filip Hrgovic's first pro fight in his native Croatia has taken a drastic change in plans—and a more dangerous challenge, to boot.

The unbeaten heavyweight—who captured a Bronze medal in the 2016 Rio Olympics—will now face Amir Mansour on September 8 in his hometown of Zagreb, Croatia. The American southpaw replaces originally scheduled Gary Cornish, a Scottish heavyweight who was medically scratched from the show.

Hrgovic is no stranger to tough challenges, having faced a competition level far advanced to most heavyweights still getting through their first full year in the pro ranks. The gifted former amateur standout and Olympic medalist is coming off of a 4th round knockout of previously unbeaten Filiberto Tovar in June, and in the 6'7" Cornish had an opponent who boasted a rare height advantage over the 6'6" Croatian.

Whereas Cornish was not only taller and heavier but who also fights out of an orthodox stance, Hrgovic now has barely two weeks to cram for an entirely new matchup. The 6'1" Mansour (23-2-1, 16KOs) is undersized by today's heavyweight standards, not to mention his southpaw stance and far more aggressive fighting style.

Of course, you don't survive the amateur ranks at the World level by not being able to make an adjustment or two. Still a professional rookie having only entered the paid ranks last September, the 26-year old upstart insists it's still business as usual.

“I haven’t had much time to study Mansour yet,” says Hrgovic (5-0, 4KOs). “I know he's a southpaw and shorter than my original opponent so I will have to alter my training accordingly, but as I always say, you have to be able to beat anyone if you want to become World Champion.

“The technical and physical aspects of my preparations will remain the same. I have to be prepared for a tough fight against someone who will definitely have a lot of motivation to put me down."

At 46 years of age, any opportunity to step in the ring is all the motivation that is ever needed for Mansour. Long reformed out of the ring following an extensive bit in prison, the Delaware-based boxer has built a reputation as a formidable gatekeeper and occasional spoiler.

Even in defeat he offered spirited showings in a 2014 Fight of the Year-level slugfest versus Steven Cunningham and in a Jan. '16 injury TKO loss to Dominic Brezeale. In the latter, Mansour scored an earlier knockdown but was forced to retire on his stool after biting through his tongue and not being able to continue due to swallowing alarming amounts of his own blood through the wound.

Only two fights have since materialized—a 12-round nod over Travis Kaufmann in his opponent's Reading, Pennsylvania in their March '17 thriller, followed by a technical decision-turned-No Contest versus unbeaten Sergey Kuzmin on the road in Moscow, Russia last November.

Given his level of opposition and willingness to travel the globe regardless of the obstacle, Mansour brings more to the table than most heavyweights normally tabbed to face rising prospects. As Hrgovic is eager to accelerate through the ranks, what he sees in the assignment change here is not a style conflict, but rather a quicker path toward achieving his own career goals.

“I never want to rank boxers so I will not say whether this is a tougher test, but Mansour being better ranked internationally with a lot of experience definitely make him a serious threat," notes Hrgovic. “I believe Mansour will be motivated to show his value by beating me and claiming the WBC International belt.

"That being said, I will not let him grab that chance. It will be two great champions fighting hard on September 8 to gain the respect they deserve.”