Mayweather vs. McGregor Pt. 2 – Are We In for a Rematch? 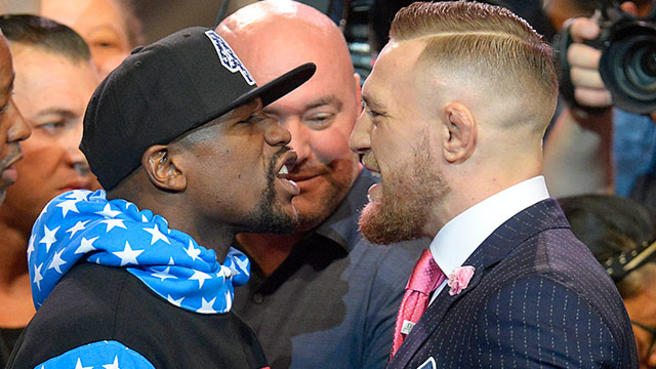 The possibility that Floyd Mayweather Jr and Conor McGregor will meet again in the ring seems pretty realistic right now. It looks like both sides would be thrilled to have a rematch of their lucrative Las Vegas duel that brought both boxers a lot of money.

Their 2017 match came as a culmination of a long-lasting feud between two superstars in the world of combat sports. Apart from allowing the two arch-rivals meet face-to-face, the bout also made the entire planet talk about boxing once again. It seems everyone would like to see a rematch!

Although rumors about a rematch have been circling around ever since the first match ended, it wasn’t until recently that it hit the headlines. It all happened when Leonard Ellerbe, Mayweather’s right-hand, decided to talk about the potential rematch.

In a recent interview, he hinted that the boxing fans might be in for a real treat in the near future, saying that, if McGregor wants it, he’s “always welcome to that ass-whooping”. His statement came as a response to McGregor’s recent interview, in which he asserted he’s ready to reignite the rivalry.

Ellerbe did point out that this was, in fact, his personal opinion, rather than the opinion of the man himself, Floyd Mayweather. It’s Mayweather who has to make the final decision, after all. And according to Ellerbe, the chances for that are still 50-50.

The thing is that boxing is no longer the main source of income for Mayweather; for the last couple of years he’s invested a lot of his money (and time) in Times Square real-estate so getting back in boxing action could sway him away from the business route he’s envisioned.

Still, for a boxing legend, one final challenge before retiring for good probably does feel tempting. And considering that Conor’s been going on about it a lot lately, perhaps Floyd might decide to let him try his luck once again.

But, it’s not just about giving his nemesis another chance; it’s also about the dough. Mayweather is already 42, meaning that he’s got only a few years left in his professional career, especially at such high level. Sure, he’s one of the richest athletes on the planet, but you can bet he’d like to add a couple of millions more to his bank account. After all, Floyd Mayweather nickname is The Money.

How Much Money Was There in the ‘Money Fight’?

Labeled ‘The Money Fight’, the match between the undefeated eleven-time five-division champion of the world and at-the-time UFC Lightweight champion has added many zeros to both fighters’ accounts. Mayweather's guaranteed paycheck was 100 million dollars, while McGregor received 30 mil.

But, that’s not all, both boxers received their share of the purse. Although the amount they earned wasn’t made public, it’s assumed Mayweather got himself about $300M, while his opponent received three times less.

The ‘Money Fight’ also made a lot of money for the venue in which it took place, as well as for the organizers of the fight. The official report of the Nevada State Athletic Commission is that 13,094 tickets were sold, generating more than $55M at the live gate.

This event also made a lot of money for broadcasters. In the United States, the fight was broadcasted through Showtime’s Pay-Per-View scheme and has made 4.3 million domestic buys. In the United Kingdom, with nearly 900,000 PPV buys, the match generated a $20M profit for Sky Sports.

Obviously, with so much money involved, a rematch surely seems attractive for many parties. The two fighters are still getting a lot of headlines, so their second clash would definitely get a lot of attention from boxing fans around the world. And that means that the second installment of the Mayweather vs. McGregor fight could earn them even more money.

Can McGregor Get Even with Mayweather?

After losing the UFC title to Khabib Nurmagomedov in October last year, McGregor decided to end his MMA career. But, the Irish fighter is only 30. And that means that if he wanted, he could extend his professional career for at least another decade.

Of course, his career path does not have to involve MMA; he can switch his focus to boxing. Some of the best fighters in the world achieved their biggest success in their thirties. Maybe the same could happen with the Notorious?

If that’s his plan, he could put his boxing career in the fifth gear with a win over one of the greatest boxers in history. Obviously, Mayweather would be the favorite once again. Actually, there are some sports betting sites that you can find at OffshoreSportsbooks.com which are already offering odds on this match, even though it’s still unclear whether the match will happen at all. If it does, it’s probably going to happen in 2020, after Floyd turns 43. He is not getting any younger – time is working in McGregor’s favor.

And according to McGregor himself, since the defeat in 2017, he’s been working incredibly hard to polish his boxing skills. In a recent interview, McGregor said he is pretty confident he already has what it takes to bring down Mayweather.

He also added that even in their 2017 fight, he wasn’t too far from winning the match. Considering that Mayweather is an undefeated boxing champion with 50 wins, 27 of which came as a result of a knockout, McGregor does have the right to be proud of his performances. After all, it was a technical knockout that brought the fight to an end.

And there’s no denying McGregor had a few shiny moments over the course of the match. According to him, he was “whooping him in the early rounds” before Mayweather finally decided to give up on his regular boxing strategy and try with a completely new one. The risk paid off as McGregor wasn’t prepared for a style of boxing his opponent has never previously used.

So, who knows, maybe McGregor will be able to pull level with Mayweather? Of course, only if he gets a chance to do so. The biggest problem is that there are many fighters out there who want the same as the Irishman. Even Manny Pacquiao is hoping for a rematch. But, time is ticking away for Mayweather.