Jermell Charlo: I Know That I Won The First Fight 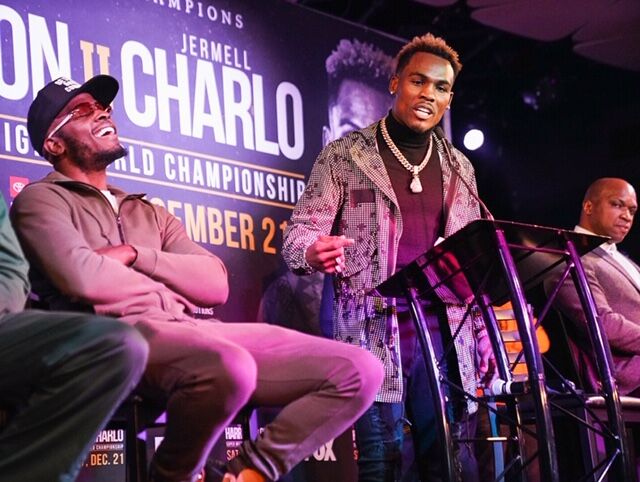 Tickets for the event, which is promoted by Lions Only Promotions and TGB Promotions, are on sale now and can be purchased at the Toyota Arena box office and Ticketmaster.com.

Harrison vs. Charlo II has been building ever since the end of the first matchup on December 22, 2018. The two were set to meet on June 23, but the rematch was postponed when Harrison suffered torn ligaments after spraining his ankle in training.

Now that he is fully healed, Harrison is ready to cement his hold on the title while Charlo is ready to take back what he believes belongs to him. The rematch comes just one day short of a full year from the first time the two stepped into ring against each other on FOX.

Here is what the press conference participants had to say Thursday from the Conga Room at L.A. Live:

"Every time I see Jermell I just feel like he's pretending. He's convinced everyone he's the toughest guy in the world. He gets up here and barks and makes excuses. I beat you the first time and I'm here again.

"If I was scared, I wouldn't be here right now. I didn't take any fight in between. I haven't fought for a year, but I wanted to be put right back in it.

"I could beat him anywhere, it doesn't matter. We could fight in this room right now. Nothing is going to change.

"There's no respect. I'm going to show him each and every time. I'm not the one to play with. This isn't Jorge Cota. You have somebody from Detroit. Whatever you want to do, we're ready to do it at any given moment.

"His words definitely sparked the fuel in me that's on fire now. He talks loud, but he's not going to do anything. He doesn't have the skill set to beat me.

"When he fought against Jorge Cota, he was the exact same fighter he was against me. There was nothing different. A leopard doesn't change his spots. He's going to hunt the same.

"When I say it's all on the line, it's really all on the line. I've never had a fight that's been this important. There's nothing else that matters. This right here can change my life."

"December 21 is my day. December 22 was the day they made a decision to give Tony a victory. I could have fought for my belt already but you saw what I did to Cota on June 23 and you saw what I was going to get ready to do to you.

"The judges that gave him the first fight woke me up. It's motivating me. I'm past all the talking. I don't need to talk trash about him.

"Nothing's going to make me slow down. I'm going to move forward and I did. I went on and fought and showed everyone what I do. You see why I'm that guy.

"It would be great to get a knockout, but we're down to go 12. I'll go to 15. It doesn't matter. He can't stand up to me in there and hurt me. He's running scared. I'm for real about this. It's about our hearts.

"I know that I won that first fight and I'm going to do things in a more dominant fashion this time. I'm going to be overpowering and ferocious. It will be the best Jermell Charlo. My plan is to show everyone that Tony Harrison is not on my level.

"The loss taught me to be more patient. It's serving as a great motivator. I feel I'm the best in the division and it's my job to show everyone why I'm a threat to everyone at 154-pounds."