Are Tyson Fury and Anthony Johsua trying to cut Deontay Wilder out the picture? 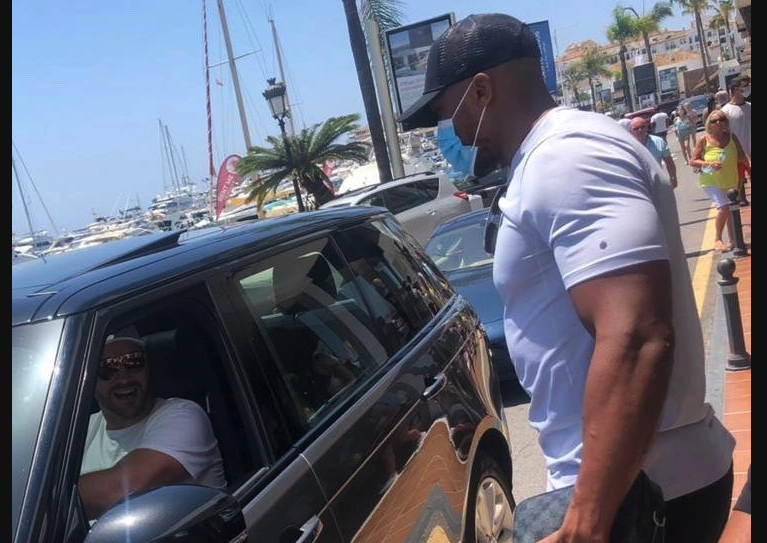 There are approximately 141,000 residents in the city of Marbella at any given point over the year but in the summer, that figure can double as holidaymakers the world over make a beeline for Spain's Costa del Sol. It really is paradise as temperatures reach over 30 degrees and the Mediterranean sparkles in the background. However some people find it a bit on the touristy side with the most heard complaint being that it can be too congested as the hordes of visitors make their way around.

Despite the mass number of tourists in Marbella and the general bustle on the streets, Tyson Fury and Anthony Joshua were able to cross paths at exactly the right time during their respective holidays in the city. Joshua appeared to be crossing a street as Fury’s black Range Rover pulled up next to him for a chat. Some might call that fate.

That isn’t Dillian Whyte’s take though as the Englishman has accused the two heavyweight kings of staging the meet in order to drum up support for their upcoming bout. The only problem is, Fury is scheduled to fight Deontay Wilder first despite having signed a deal to fight Joshua in 2021.

"I've just gotta smash Deontay Wilder's face right in, in the next fight."

It does make you wonder whether Fury and Joshua are trying to cut Wilder out of the picture?

It may be worth listening to what Whyte has to say when you consider that this is a fighter who knows a hatchet job when he sees one. After all, the 32-year-old has been the mandatory challenger for the WBC belt for over 1000 days after winning 11 fights in a row and remaining unbeaten since 2016. Whyte is arguably the authoritative voice on evasion tactics given how long he has had to wait and the excuses he has been dished up.

Instead of fighting Fury for the WBC belt, Whyte will fight the Russian Alexander Povetkin on August 22nd, so you may have to give Whyte the benefit of the doubt here.

Even if you put Whyte's ramblings down to cynicism, it doesn’t take a huge amount of imagination to picture a scenario where Fury and Joshua exchanged texts to arrange a public get-together that would naturally get the boxing world buzzing with excitement. Although if one were to play the devil’s advocate, they might wonder what Joshua has to gain in the short term as he is, as of the 5th of August, at fairly long odds of 6/4 with Betway to beat Fury. We all know, however, that this bout may well be the biggest money turner in the history of the sport and that always helps fighters overlook their chances, or lack of them in this case.

Make no mistake, Fury and Joshua are old hands at this and they know that the louder the clamour for their fight, the more chance there is that it will take place before Fury’s bout with Wilder.

Of course, Wilder has a contract that legally binds Fury to complete the rematch with him. Legendary fighter and fellow American George Foreman is urging Wilder not to give in to the pressure of the super-fight between Fury and Joshua, as he aptly puts it, "When you have a signed contract you have it all, you give it up ya dead in the water."

Sound advice from the 71-year-old but it’s worth pointing out that there have been earlier calls for Wilder to cut his losses and end his battle with Fury given the injuries that he sustained during their second bout at the MGM Grand in Las Vegas. Despite Foreman’s knowledgeable warning, the noise around Wilder may just be getting to a crescendo that he is no longer able to stand.

Which does make you think that if Eddie Hearn or Frank Warren were to pick up the phone and make an offer to Wilder to stand aside, the Alabaman may well decide to take it. Alternatively, he may dig his heels in the ground and fancy a shot at redemption. That may not be a turn of events that either Fury or Joshua’s camp enjoys but for the boxing fans around the world, they are indeed spoilt with the upcoming fight schedule.

Indeed, it will be water off a duck's back for punters when you consider that Wilder’s fight with Fury is one of the most eagerly anticipated bouts of 2020.

There is unfinished business between the two and despite the gulf in class that was evident in February when they squared up in Vegas, Wilder’s punching power will always make sure this is a fight that will be easily sold to the public.

The bottom line is that world-class boxing is back and the matchups in the heavyweight division are as good if not better than they have ever been. Whatever fight comes first doesn't necessarily matter to the legion of fans around the globe.

That doesn't mean that the actual fighters are as easy going and you'd have to admit that there is a definite agenda going on in the background. Over the next few months, the pressure on Deontay Wilder to step aside will undoubtedly grow. Will the 34-year-old see it as the out that lets him keep his dignity or will he come out swinging in the trilogy fight?