Has Mike Tyson’s WWE Stunt in 1998 with Stone Cold Steve Austin Helped Evolve both Him and the WWE? 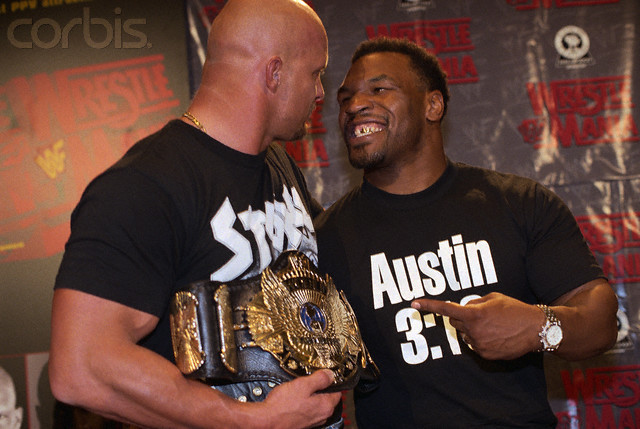 When Mike Tyson infamously bit Evander Holyfield’s ear in 1997, he was disqualified from the heavyweight mega-fight and charged a fine of 1.8 million Pounds. It was during this time the then titled WWF was in a tight corner. WCW, their then rivals, were determined to hammer McMahon’s WWE (then WWF) in the Monday night rating war. At this time, WCW boasted some of the most iconic household names such as Hulk Hogan, Scott Hall and Kevin Nash, while WWE struggled to compete with them, following the loss of advertisers and their declining ratings.

WWE needed to do something, particularly because they were losing their most celebrated talent, such as Bret Hart, to WCW.

In the beginning of 1998, WWE emerged to be the biggest talk in the industry, after Stone Cold Steve Austin got hooked with ‘’The Baddest Man in Town’’ Mike Tyson, the disgraced boxer who had just lost his boxing license. Despite his disgraceful incident in the boxing world, he still had some appeal in his mainstream. Being a megastar, McMahon, who had purchased WWF from his father only five years earlier, decided to take the biggest gamble of his life by taking Mike into his wrestling organisation, paying him a total of $3.5m.

Tyson was known to live a lavish lifestyle and had by then seen a drop to his last income of 107,159 Pounds. To McMahon, the timing was everything, and there would never be a better opportunity to pounce on Mike. He would appear as a special guest referee in WrestleMania 14 and make several other appearances. It did not bother McMahon that the media did not take Mike’s involvement with wrestling too well. What mattered to him was the impact it would have on the ratings. To him, every publicity, both good and bad, was simply publicity, and bad news is always good news.

At this point, iron Mike was given a huge chunk of money to play the enforcer in the 1998 WrestleMania 14, a match that would take place between Stone Cold Steve Austin and Shawn Michaels.

After the former heavyweight champion Tyson watched the Royal Rumble, which aired on Mondays, he made a debut in the Raw show the following night. This is an entourage that will be remembered in a long time in the wrestling industry. WWE’s owner Vince ushered Tyson in, playing his McMahon character. As Tyson was giving his congratulatory piece, he was interrupted by a sound of shattering glass, indicating that Austin was about to show up.

As soon as he had emerged in the ring, Tyson offered to shake his hand, to which he declined, saying, ‘’I ain’t gonna shake your damn hand. I could beat you any day and twice on Sunday.’’ He followed it up with his dreaded two-finger sign.

What followed was an unexpected shove from iron Mike, and just then, the two were on the floor boxing each other as officials scrambled into the ring to separate them. The Baddest Man on the Planet would give Austin the mainstream he needed to be crowned as a megastar. Having been a big wrestling fan as a kid, Tyson was genuinely enjoying the stance.

As the two crashed, the WWE ratings begun to rise. Eric Bischoff, the WCW chief, agreed that the investment made by McMahon had paid off handsomely. In an interview, he said, ‘’that was one moment I knew with certainty that WWE was making a serious comeback and I was in trouble.’’

Tyson was a hired ringside enforcer for Stone Cold, who would be facing off with Shawn Michaels. This feud drew a large audience. His entrance had attracted chanting from the people who shouted ‘’Holyfield’’, but the boxer chose to ignore. The involvement of Mike in WrestleMania 14, where he sided with Stone Cold turning on DX, made more headway for WWE, making it get its win on the Monday Night Wars. After the end of the match, Tyson finally raised Austin’s hand as the WWF champion after knocking Michaels down.

His presence had boosted WWE’s pay-per-view gross to more than 8 million Pounds. This was the largest money-spinning WWE show ever witnessed. By 2001, WCW was out of business, after RAW gained a successive win against Nitro. In January 2010, Mike returned to RAW as a guest host and teamed up with Chris Jericho. In a list of pro-wrestling angles in wrestling, Power Slam, one of the most influential magazines, ranked the 1998 WWE show No 1. It was after this period that Stone Cold and The Rock led WWE to its boom.

Today, WWE is the world’s juggernaut in wrestling, equally to what the UFC is in MMA. Being a company with millions of users from all around the world, bookmakers even provide betting odds for the biggest matches in WWE and UFC. While the outcome of the matches in UFC betting often is completely unpredictable, insiders can make a good fortune out of WWE betting since after all, everything is scripted here.

To bring the article to an end now – it is plain to see that Mike Tysons WWE stunt in 1998 helped the company win the Monday Night Wars again WCW, despite taking a rough path in the ’80s when it was still in its infancy stage, trying to take over America’s rival territories. Being behind the mainstream sport that raised the ratings of WWE, Mike remains to be an outstanding figure in the wrestling organisation.