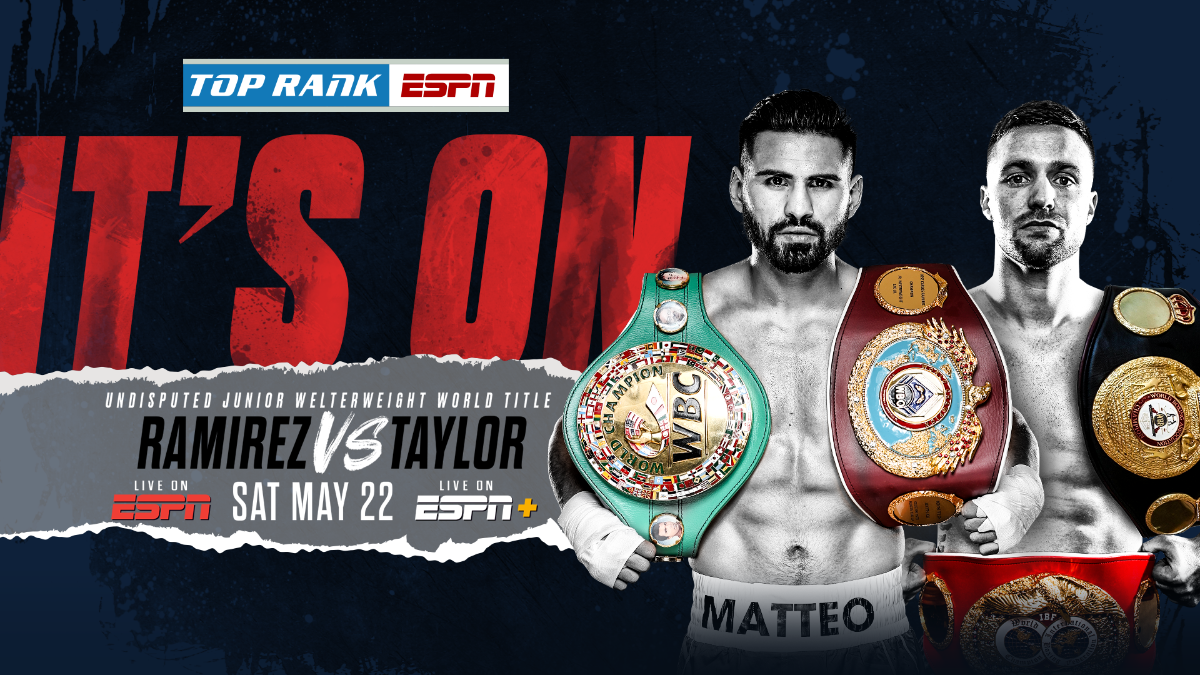 Promoted by Top Rank, Ramirez-Taylor will be televised live on ESPN and ESPN Deportes (and simulcast on ESPN+) starting at 8:30 p.m. ET/5:30 p.m. PT. The location, venue, and undercard information will be announced shortly.

“This is the best boxing has to offer, two elite fighters in the prime of their careers colliding in a legacy-defining matchup for the undisputed championship of the world,” said Top Rank chairman Bob Arum. “It’s a true 50-50 fight, one that the fans and both fighters demanded.”

Ramirez (26-0, 17 KOs) has been a world champion since March 2018, when he toppled Amir Imam via unanimous decision to win the vacant WBC strap. Following the Imam victory, he hired noted trainer Robert Garcia, and the duo has combined to go 4-0 in world title fights. Ramirez knocked out Maurice Hooker in July 2019 to unify world titles and defended his belts last August with a majority decision over former world champion Viktor Postol. Ramirez, a proud son of Mexican immigrants who hails from Avenal, Calif., is an agent of social change in his community. He’s devoted his time and resources to myriad causes, including cancer research, water rights for area farmers, and COVID-19 relief for Central Valley field workers.

“I look forward to making history by becoming the first boxer of Mexican descent to hold all four major world title belts,” Ramirez said. “I dedicate this fight to the Central Valley farm workers, who are out there every day helping feed the world. This fight is big, but nothing is bigger than getting vaccinations to the farm workers right now in the Central Valley.”

"No excuses, no fake social media promises, no grandstanding. This is the best fighting the best at their absolute best,” said Rick Mirigian, Ramirez’s manager. “Jose will have his hand raised in the end, solidifying his status as a Hall of Famer.”

Like Ramirez, Taylor (17-0, 13 KOs) fought as a lightweight at the 2012 London Olympics, where he advanced to the Round of 16. While he didn’t turn pro until 2015, “The Tartan Tornado” won the Commonwealth 140-pound title in only his seventh pro bout. Taylor toppled Postol by unanimous decision in 2018 and won the IBF world title the following year with a decision over Ivan Baranchyk. He unified the IBF and WBA titles in October 2019, edging Regis Prograis by majority decision in a brutal masterpiece. He made his first defense as a unified champion last September, blasting out mandatory challenger Apinun Khongsong in the first round. Taylor hopes to make a little history of his own as the first undisputed, four-belt Scottish champion.

Taylor said, “I’m excited it’s been finalized and over the line. I can’t wait to get in there for the biggest fight of my career. Fighting for the undisputed title is something all boxers dream about.”