Where to next for Jose Zepeda after statement win? 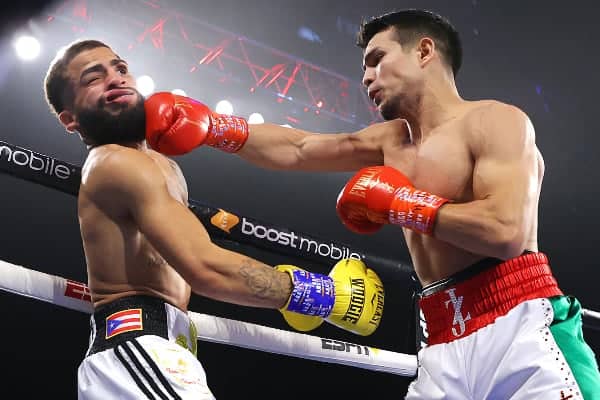 The build-up to Jose Zepeda’s fight with Josue Vargas was an excruciating watch. Although to be fair, most press conferences and weigh-ins before a high profile bout normally are as boxers tend to talk over their opponent in a desperate competition to prove who has the least respect for the other one. Every now and then though, you do get a more subdued boxer who prefers to let his adversary run his mouth off in the knowledge that he will let his fists do the talking when the first bell sounds on fight night.

Indeed, if you think back over time you can pinpoint a few of these silent assassins who opted to settle any score with their hands rather than a microphone. Manny Pacquiao and Joe Frazier were two of the greats of the sport who you could certainly call gentlemen in the sense that they never made a fool of themselves during the build-up to any of their fights. As far as modern-day fighters go, Jose Zepeda can also be added to that group as the American doesn't overdo it either verbally. Sadly, the same can't be said for his recent opponent Josue Vargas whose loudmouth approach meant fight fans got behind Zepeda in the hope that he would administer a few life lessons to a man that was nine years his junior.

It should be said that remaining tight-lipped when you’re being goaded by a man less than a centimeter away from you is easier said than done. This is where the intrigue and suspense in boxing comes from as, in some ways, the eagerness to settle a score is now shared by the boxing community who are completely invested in the outcome of this fight. That’s why Vargas got a somewhat hostile reception on his ring walk despite his bout against Zepeda taking place in New York, the 23-year-old’s hometown.

There was, however, an electric atmosphere in the Hulu Theater at Madison Square Garden as the two men entered the ring given that boxing can be unpredictable at the best of times, and nice guys often end up knocked out on the canvas. Yes, it can be a cruel game but it can also be an extremely satisfying one as in this instance, it took less than two minutes for Zepeda to win the fight by TKO after catching Vargas on the chin with a vicious left hand before most spectators could find their seats. The 23-year-old attempted to get up but he was beginning to dance involuntarily with his senses scrambled and his legs shaking. Having survived the count of ten, the referee sent a dazed Vargas back into the lion's den but less than ten seconds later, he was trying to stop Zepeda's barrage of haymakers with the fight stopped in the first round at a time of 1:45.

Now, if you looked up the definition of statement win in the dictionary, you would find a picture of Zepeda knocking Vargas out. Indeed, it was so comprehensive that you do wonder if the 32-year-old has now done enough to secure a fight against the current light-welterweight champion, Josh Taylor, when you consider how swashbuckling his performance was in the Big Apple.

We know that it is Zepeda’s desire to fight Taylor given that he called out the Scot following his showdown with Vargas but there are questions surrounding a potential bout between the two.

Notably, Taylor was able to beat Jose Carlos Ramirez when they fought in May which was a significant development for a few reasons, but chiefly because Zepeda wasn’t able to do the same after losing to the American in 2019. With this in mind, you can understand why some may question the credibility of the two going toe-to-toe.

However, as mentioned, it’s a point worth considering for many reasons given the controversy that surrounded the judges' decision to award Ramirez the win over Zepeda. Most fight fans in attendance and at home had a vastly different take to the scorecards of the judges, which is why perhaps Zepeda should be afforded a world title shot against Taylor.

Of course, that won’t happen right away as Taylor is first scheduled to fight Jack Catterall in late February 2022. Should the Scot pass that assignment against the Englishman, which the latest online betting odds say should be nothing but a mere formality with Taylor at just -1200 to win, then perhaps a fight with Zepeda would be penciled in for the summer of 2022.

You imagine that the odds would be a lot more even if Taylor fought Zepeda as both these men are southpaws and have a staggering 40 knockouts between them. Indeed, they say that styles make fights and this would in all likelihood be an all-time classic in the light-welterweight division, but who would win?

You would be a brave man to bet against Josh Taylor given that the Scot is so far undefeated in his career but perhaps more astonishing is that he has won 13 of his 18 bouts by way of knockout. With that said, the Jose Zepeda that the world is now seeing is by far the best version we have ever witnessed and after his ruthless demolition job of Josue Vargas, he does appear to be the most devastating puncher in the division at this moment in time.

It’s almost impossible to say but there’s reason to believe that Jose Zepeda has one last rodeo in him and would take the exceptionally talented Taylor all the way.