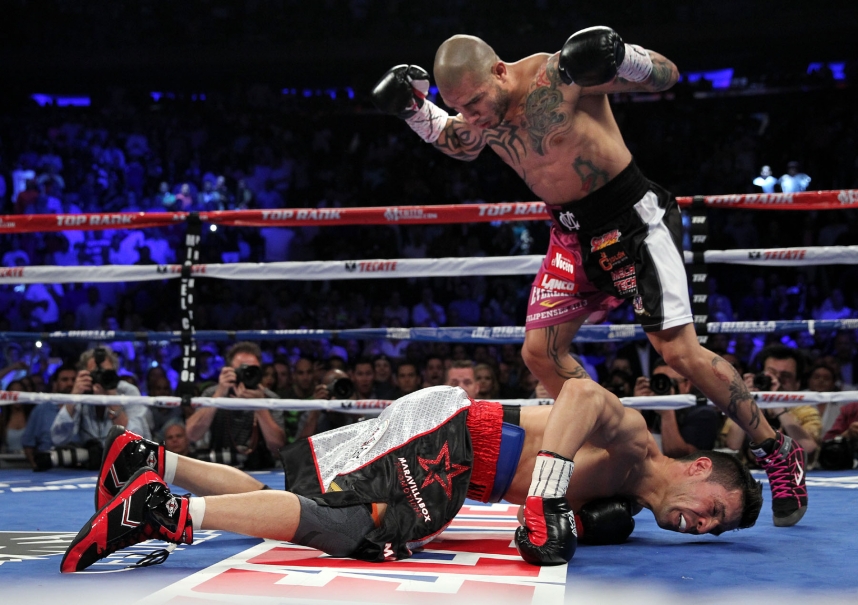 Two upsets in two weeks, a Golden Boy breakup, the rise of new fighters, the fall of veterans, the revival of a hall of fame fighter, and tons of match-ups still looming or getting finalized. There are many questions that the fans want to know more about in the boxing industry. I will touch some of the major wins that I see people constantly asking about and some that are more intriguing now than they were before.

Miguel Cotto vs who next?

People can’t get enough of the revived Miguel Cotto. Cotto’s overwhelming popularity has always been a great selling point so to see him win as an underdog against the highly praised Sergio Martinez has people thinking he can beat Floyd Mayweather under new trainer Freddie Roach. It only takes one big fight for someone like Cotto to gain his hype back and we are seeing that right now. Everybody wants him to face Canelo Alvarez next. Alvarez first has to get by Lara on July 12th. That will be no easy task. If he does, I expect Canelo-Cotto to get done for December. It’ll also probably be the biggest PPV fight in 2014. If Canelo loses though, Cotto might have a problem. Lara is under Haymon and likely can’t leave Showtime. One person that people aren’t thinking about is James Kirkland. If Lara upsets Canelo it could be Kirkland that gets the call. Mayweather’s next opponent will likely be decided by July 12th but if Mayweather says he’s moving his date to December, maybe he would face Cotto then. There are tons of options for Cotto but they all depend on the Canelo-Lara result.

How good is Chris Algieri?

We saw a very close upset Saturday night that could have went either way. Algieri fought the last five rounds with one eye giving Provodnikov all he could handle. The kid has some serious boxing skills despite his lack of power. Everybody is afraid to fight Mauricio Herrera and I consider Algieri a better version of him. At 140 he can beat anybody, even Danny Garcia. It’d be a good idea to try to take over that weight class first and build up a bigger name before moving to 147. He’s mentioned Pacquiao or Mayweather but I say that has 0% chance of happening right now. I give him a good shot to clean out the junior welterweights. He has as good a chance as anyone out there to beat Garcia, Peterson, Judah, Matthysse, or Broner. He’s good, and only time will tell if he can beat great.

What happens now to Sergio Martinez and Ruslan Provodnikov?

Provodnikov will be ok. His defense is horrible and he comes to fight every time he steps into the ring. People will always want to watch him fight and his options are still available even after his defeat. That Brandon Rios fight becomes far more intriguing now. As for Martinez, that knee is fine according to his team which means he will probably give it one more try. I like a fight in Argentina against someone good but not great. Let’s see how he does against someone he’s supposed to beat. Sam Soliman may be a good comeback fight for him.

Golden Boy? Top Rank? Haymon Boxing? What is going on?

So Haymon Boxing is a legit company and Al Haymon continues to sign fighter’s to his growing stable. Schaefer is looking to get out of Golden Boy entirely according to some close sources. This means that his stock and everything would be done. If that happens everything should be negotiated to where Golden Boy has it’s fighters and Al Haymon has his. Trust in Oscar’s leadership in Golden Boy is shaky though. They still have Canelo and the Golden Boy brand that a lot of fighters still believe in. I think all three companies could be ok but HBO, Golden Boy, and Top Rank will probably not work with Haymon Boxing. Basically the entire situation is a mess and nobody knows what is going to happen.

Is Floyd Mayweather fighting in September or not?

As we approach the middle of June Mayweather still has not yet chosen an opponent for his scheduled September 13th return. Well, there is a big problem here. The two places Mayweather would choose to fight, MGM Grand and Barclay’s, are both not available to him on September 13th. Mayweather reserver the 13th under Golden Boy’s promoter license and since he’s not working with them anymore because of Schaefer’s departure he technically doesn't have that date reserved. That’s not to say that he can’t work out something with Golden Boy but things are shaky everywhere and I wouldn’t be surprised to see Floyd Mayweather move that September 13th date.

Not a shabby Summer schedule for boxing huh?

Not to shabby at all for a sport that usually lacks in summer action. Canelo-Lara fight July 12th, Golovkin-Geale/Jennings-Perez is on July 26th, Rios-Chaves/Kovalev-Caparello hits August 2nd, and Shawn Porter vs Kell Brook and the return of Danny Garcia likely against Gabriel Bracero is on August 9th. It should be a good summer that continues into a fall schedule that will likely be amazing.

It’s funny to see that fans go crazy on Twitter. Most of our tweets are sent out to get reactions from fans whether we actually believe what we are saying or not. Boxing fans are the most critical fans you can find. They are also the most dedicated. Bashing on fighters, Oscar De La Hoya, Stephen Espinoza, and whoever the fans can get their tweets too has become abundant over the last two years. Most of the top guys ignore them but they listen to what the fans have to say. Ratings, PPV numbers, match-ups, all these things are being analyzed through Twitter by the top people. They may not agree with everything the fans say, and they may be frustrated by idiotic response on their timelines, but they listen to the fans. As much as the fans like to hate though they wouldn't have it any other way. They can bash Floyd Mayweather but when he retires they’ll be upset. They can bash Showtime or HBO but if either network stopped showing fights they would be disappointed. It is what it is.

What is Chavez Jr’s deal?

Julio Cesar Chavez Jr is scheduled to return in October now. He’s still not getting along with Arum but they may find a way to get a fight anyways. Carl Froch is the likely opponent they are gunning for. Golovkin took a fight with Geale in late July making an October return to close for him should he win. There are still issues with Top Rank but the fallout with Golden Boy and uncertain future of Haymon fighter’s, Chavez Jr may be more willing to stick with them now.