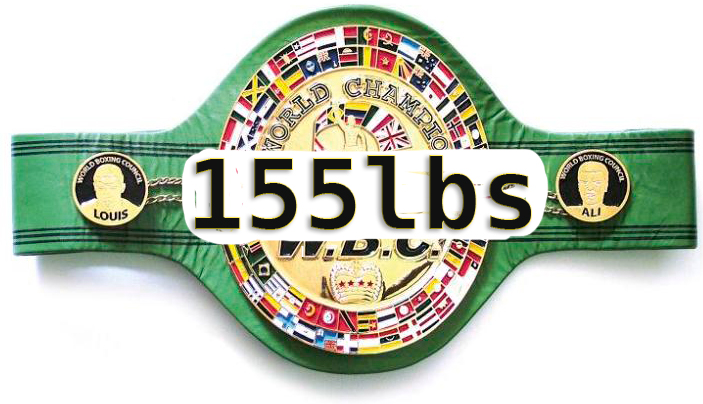 What is a catchweight fight? When two fighters in different weight classes negotiate and agreed on a weight to fight. The purpose of a catch-weight is to compensate smaller fighters to gain and bigger fighters to cut weight. This allows big name fighters in two different classes to fight. An example was Saul Alvarez vs Miguel Cotto for the WBC Middleweight title. This title is fought at 160lbs. However they agreed to meet at 155lbs. Also Miguel Cotto and Daniel Geale fought at a catch weight of 157lbs.

1. Bigger fighters have to drain to make the weight giving their opponent an advantage. Losing 5lbs when you're a 160lbs physically fit fighters is very difficult. The fighter is forced to lose muscle mass.

2. The title holder, lets take Migule Cotto is a natural 147lbs and holds the WBC Middleweight title (not any more). Fighters like GGG who are natural middleweights at 160lbs are forced to meet a catchweight or cannot compete for the belt middleweights belt. Or Cotto has to give up the belt. This leads to complicated negations issues.

3. Fighters are using catchweight bouts instead of facing mandatories. Saul Alvarez vs Miguel Cotto catchweight was for the WBC Middleweight title. Neither fighters has ever fought at 160lbs. Gennady Golovkin was the mandatory.

Now there is a new division being carved out below the 160lbs sanctioned middleweight class. This is holding championship belts hostage. The result... fighters like Gennady Golovkin who is a true middleweight and is the mandatory challenger cannot fight for the belt.

Canelo recently stated about Golovkin, “If he wants to fight with me, let him come down to 155 and I'll fight him whatever day he wants. At this moment, my body isn't ready for 160 pounds.” If thats true how are you the WBC Middleweight title champion? Cotto also stated when he had the belts “Anyone who wants to fight me must accept a catchweight or otherwise there is no fight.”

Im not saying that catchweights don’t have their place in boxing. They’re designed to bridge the gap between fighters in separate weight divisions. Im saying that this cannot continue to happen. Saul Alvarez is set to fight Amir Khan @ a catchweight of 155lbs for the WBC World middleweight title on May 7th. Khan in his last fight weighed in @ 146½lbs. Thats the most he has ever weigh-in for any of his bouts. What is Khan wins.. (i know. just saying) Will he face Golovkin, Jacobs, Lemieux or Saunders? These fighters are true middleweights and walk around at about 170lbs.

I guess for now we’ll continue to see the new catchweight division as long as the boxing industry allows superstars like Canelo & Cotto to hold the middleweight title hostage.