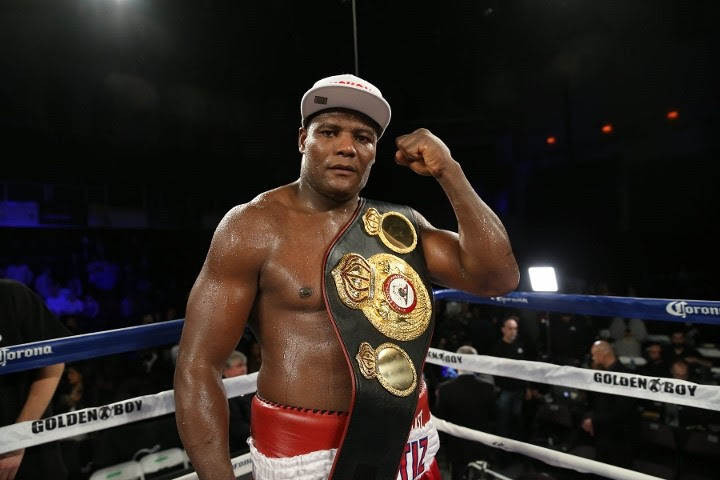 The latest update from the World Boxing Council (WBC) regarding its Clean Boxing Program left Luis Ortiz and his team puzzled. A press release from the sanctioning body revealed all of the boxers in its rankings not presently enrolled in its random drug testing program.

Ortiz' name was listed among not yet participating, which raised an immediate uproar within the boxing community given that the Cuban heavyweight previously failed a drug test but has since vowed to subject himself to 24/7/365 random testing.

The only issue: he has been enrolled since last September.

"We have proof of submission that Luis submitted his application last year," trainer Herman Caicedo told FightNights.com, along with providing such proof.

According to the documents - of which FightNights.com has obtained a copy - the former interim heavyweight titlist enrolled on September 8.

"I know this because I submitted it along with (former bantamweight champion) Juan Carlos Payano, (featherweight contender) Claudio "Matrix" Marrero and everyone else in our gym that plans to fight for a WBC title," Caicedo insisted. "Nobody else's name showed up on that list."

It is entirely possible that the matter was a clerical error on the part of the WBC, as sources have confirmed he is enrolled in the Voluntary Anti-Doping Agency (VADA)-run program.

Ortiz (27-0, 23KOs) has been placed under the public microscope since a 1st round knockout win over Lateef Kayode in Sept. '14 was changed to a No-Contest after testing positive for a banned substance. The 37-year old heavyweight has insisted all along that the result was a false positive, since subjecting himself to random testing in his best efforts to clear his name.

"I've been tested countless times since then," Ortiz told FightNights.com. "I'm a clean fighter and have made myself available to be tested at any time. I have nothing to hide, nor do I hide from anyone. With stuff like this, though, it gives other heavyweights the chance to hide from me."

Ortiz is obviously talking about unbeaten heavyweight titlist Deontay Wilder, who saw his second scheduled opponent in less than a year fall out due to testing positive for a banned substance. Alexander Povetkin produced a dirty test result last April, though the finding didn't come to surface until just over a week prior to their eventually canceled title fight scheduled for last May in Moscow.

The undefeated fighting pride of Alabama went on to face Chris Arreola - ironically coming off of a suspension for having tested positive for marijuana following his split decision win over Travis Kauffman in Dec. '15 - but suffered a torn biceps injury and was shelved for the rest of 2016. He returns on February 25, but against late replacement Gerald Washington after originally scheduled opponent Andrzej Wawrzyk was caught with Stanzonol in his system during WBC pre-fight testing.

Prior to securing the services of Washington, Ortiz publicly pleaded to land the assignment. Wilder and promoter Lou DiBella dismissed his cries, however, insisting that any boxer who'd previously failed a drug test was not under consideration for the Fox-TV primetime headliner.

"He's scared!" said Ortiz of Wilder. "The more he can use my failed test against me he will. He and (promoter Lou) DiBella are saying he won't fight me because of that. That was years ago, and since that unfortunate incident, for which I was punished, I have tested a dozen times clean. Now he's trying to say I haven't signed up for VADA Clean Boxing... guess what Wilder? I signed up last September when I was notified that all WBC contenders need to be part of their new Clean Boxing Program. I filled out the paperwork and my trainer submitted it to the WBC. He can stop using that excuse to avoid me.

"I have nothing to hide and do not have to prove any longer to anyone that I am clean. Wilder is nothing but a paper champion who happened to be at the right place at the right time against the right opponent with, most importantly, the right promoter. That's all he is."