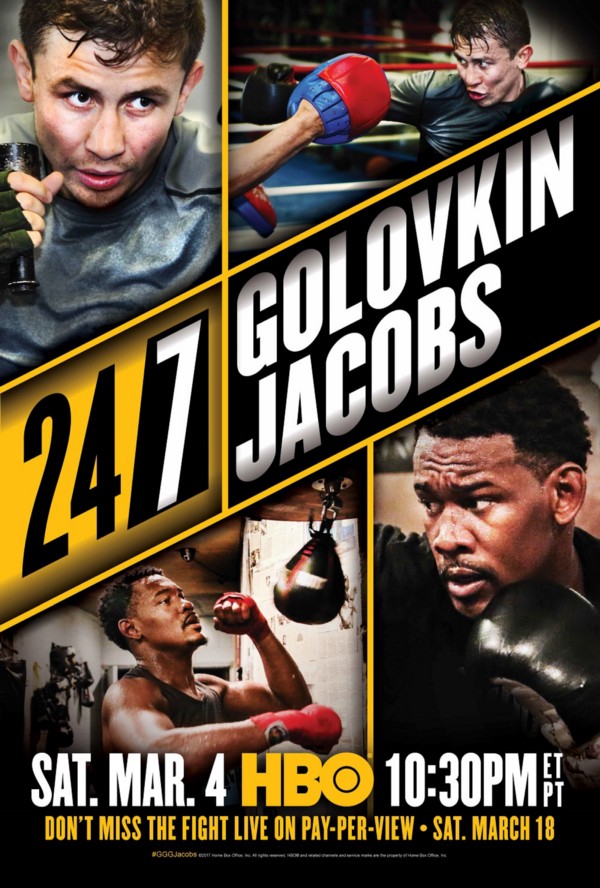 The award-winning documentary-style series returns with "24/7: Golovkin/Jacobs", a 30-minute special looking into the lives of Gennady Golovkin and Daniel Jacobs ahead of their March 18 middleweight title fight, live from Madison Square Garden in New York City. The pre-fight segment - which is narrated by award-winning actor Liev Schreiber - will premiere Saturday, March 4 at 10:30pm ET/PT, with future replay dates to be announced in the coming days.

The middleweight clash of renowned knockout artists tops a four-fight PPV event including pound-for-pound king and Roman Gonzalez and former super flyweight champ Carlos Cuadras in separate contests ahead of a hoped-for rematch later this year.

In the main event, Golovkin (36-0, 33KOs) attempts the 17th defense of at least one middleweight bout, with a perfect 100% knockout rate over the course of his six-plus year title reign. The 2008 Olympic Silver medalist from Kazakhstan - who turns 35 in April - is coming off of a 5th round knockout of previously unbeaten welterweight titlist Amir Khan last September.

Overall, Golovkin has scored 23 knockouts, to go along with 12 straight for Jacobs (32-1, 29KOs) following the lone loss of his career - a 5th round stoppage at the hands of Dmitry Pirog in July '10.

The loss was a distant second to the scariest moment of his life, when he was diagnosed with osteosarcoma, a rare form of bone cancer that forced him out of the ring in 2011. He enjoyed a triumphant return in late 2012, a comeback that included his claiming a secondary version of a title in Aug. '14. Regardless of the status, it still made him the first ever-cancer survivor to win a major title in boxing, doing so with a 5th round knockout of Jarrod Fletcher. The Brooklyn-based slugger has since made four successful defenses, chief among them a 1st round knockout of Peter Quillin in Dec. '15. Most recently, he scored a 7th round stoppage of Sergio Mora in their remach last September.