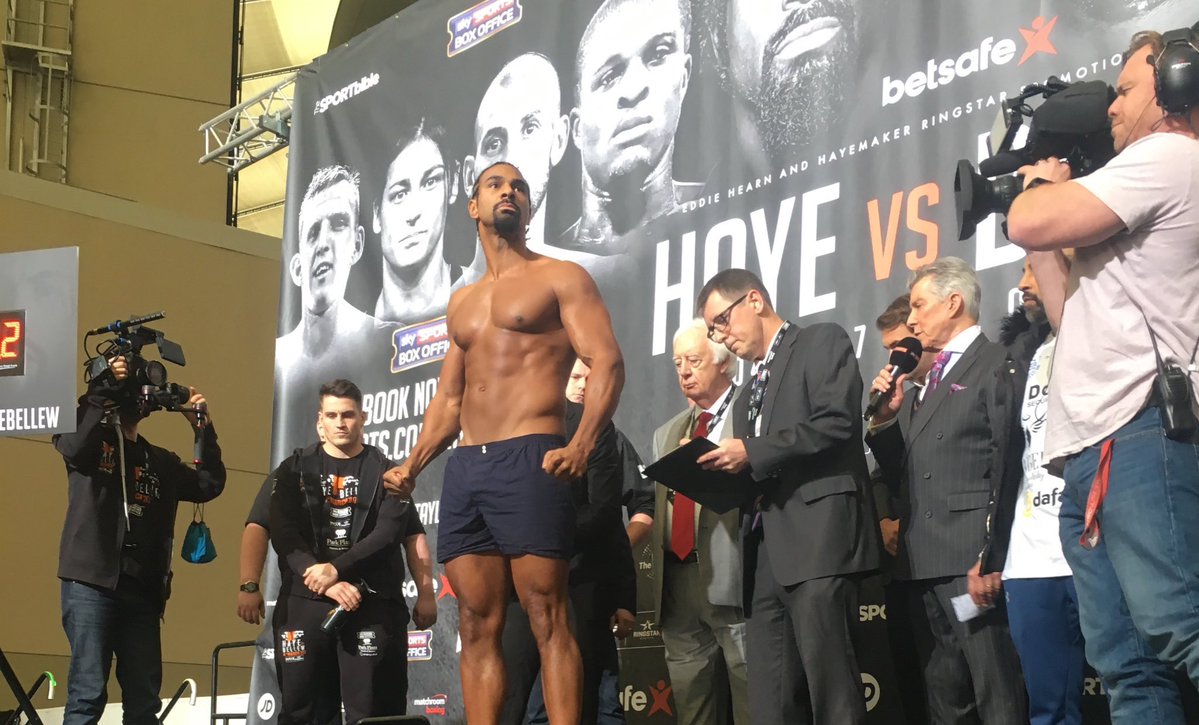 After months of trashing one another through the media and face-to-face, David Haye and Tony Bellew are now a day away from settling their differences in the ring.

The pair of Brits participated in Friday's weigh-in ceremony ahead of their Sky Box Office Pay-Per-View headliner, which airs live from the O2 Arena in London, England. Haye tipped the scales at a sculpted 224.6 lbs. for his third fight since returning to the ring last January. Bellew - a former light heavyweight contender and cruiserweight titlist - tipped the scales at a career-fluffiest 213.5 lbs. in his heavyweight debut.

Haye (28-2, 26KOs) made a one-off heavyweight pit-stop in 2007, scoring a 1st round knockout of Tomasz Bonin shortly before rising to cruiserweight supremacy with an off-the-canvas 7th round stoppage of Jean-Marc Mormeck to win the lineal championship. Just one defense followed, a two-round drubbing of Enzo Macarrinelli in their April '08 unification bout in his last ever cruiserweight appearance.

Eight straight heavyweight fights have followed, including a title-winning effort over 7'2" Nicolay Valuev in Nov. '09 - nearly two years to the date of his cruiserweight championship claim. He enjoyed two successful defenses before dropping a 12-round decision to Wladimir Klitschko in their painfully dull July '11 title consolidation clash. He sat out for nearly a year before returning with a 5th round knockout of Dereck Chisora, a July '12 grudge match that was preceded by their inciting a post-fight riot at the press conference following Chisora's decision loss to Vitali Klitschko earlier that year. It was Haye's last bout before making a comeback last January, having since won two straight.

Bellew has twice before fallen short at the title stage before the third time - and a move up in weight - proved to be the charm. The Brit lost a 12-round decision to Nathan Cleverly in their thrilling first meet in Oct. '11, then suffered a 6th round stoppage to World lineal light heavyweight champ Adonis Stevenson in Nov. '13. A move up in weight has been accompanied by eight straight wins, including his climbing off the deck to knock out Ilunga "Junior" Makabu in their condensed thriller last May to win a vacant cruiserweight belt. His lone defense came in the form of a foul-filled 3rd round knockout of BJ Flores last October, striking the Mexican-American behind the head in leading to the bout's first knockdown - an instance which went undisciplined and sadly altered the outcome of the contest.

Wedged in between was a feature role in the Hollywood hit boxing film "Creed", playing a defending champion in the latest installment of the famed "Rocky" franchise. His physique was similarly fleshy to how he appeared at Friday's weigh-in, although he has given strong indication of remaining at heavyweight for at least the immediate future,

Also on the PPV telecast, local welterweight Sam Eggington faces former two-division titlist Paul Malignaggi in a regional title fight. Both boxers easily made weight for the evening's chief support. Eggington (19-3, 11KOs) weighed 146.5 lbs. for the first defense of his strap that he won in an 8th round knockout of domestic rival Frankie Gavin. Malignaggi (36-7, 7KOs) - a former titlist at 140 and 147 lbs. - checked in at 146.25 lbs. in hopes of adding to his current three-fight win streak after a rough patch where he suffered three losses in a span of four fights.