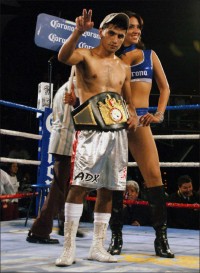 The concerns about feasting on subpar and inexperienced competition works two ways: safety issues regarding such mismatches; and leaving said groomed boxer unprepared for a real challenge.

It was a lesson Nawaphon Por Chokchai learned the hard way in the biggest bout of his career.

Por Chokchai and his team told anyone who would listen that the 25-year old Thai fly(weight) guy was ready for the challenge, despite being elevated into such a lofty position without ever having faced a warm body. The previously unbeaten boxer had spent his career facing grossly overmatched journeyman and a local debutant in his most previous outing last September.

Hernandez hasn't exactly faced murderer's row on the road to becoming the mandatory challenger, in fact at one point first in line for the title previously held by then-World flyweight champion and pound-for-pound king Roman "Chocolatito" Gonzalez. The 30-year old Mexico City native was asked to briefly put his title dreams on hold as his countryman, Carlos Cuadras put his super flyweight title on the line - and eventually lost it - versus Gonzalez in their action-packed 12-round shootout last September in the United States.

Still, the road to title glory for Hernandez at least came with wins over former titlists and veteran contenders. His level of experience was obvious in the opening round, as he dictated a hard and steady pace in outboxing the local contender. Realizing he was in a fight, Por Chokchai made some necessary adjustments in round two, but lacked the power or skillset to keep his opponent at bay.

That dynamic would prove costly in the end.

Hernandez intensified his attack in round three, nearly producing an early stoppage only for his rally to be disrupted by referee Tom Taylor calling for time to have maintenance on a slick spot on the canvas. Action resumed and so did Hernandez' offensive flurry. A combination had Por Chokchai on rubber legs, with a follow-up sequence flooring him for the first time in his career. He beat the count, but was defenseless along the ropes when the referee properly stepped in to intervene and halt the contest.

The official time was 2:29 of round three.

Hernandez comes up aces in his second career title attempt, as he improves to 34-2 (25KOs). He has now racked up 16 consecutive wins since coming up short in a 12-round points loss to then-unbeaten strawweight champion Kazuto Ioka in Aug. '11. Both now reign as flyweight titlists, which could make for a very interesting rematch should either decide to travel that route.

The bout aired live on Channel 3 in Thailand.