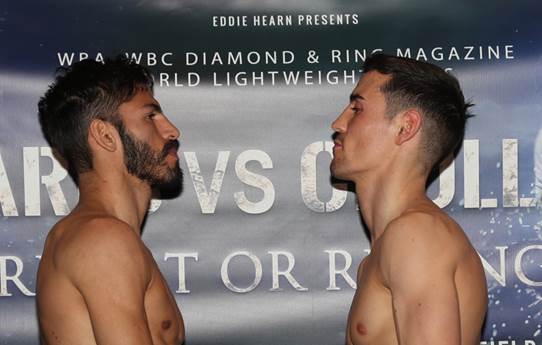 Fourteen years into his career, it appears that Jorge Linares has in fact improved with age.

The 31-year old lightweight titlist looked like the elite fighter his early career scouting report suggested in a world-class boxing clinic-like effort over Anthony Crolla in their rematch Saturday evening. Scores were 118-109 across the board for Linares, who beats Crolla for the second time in as many tries at the Manchester Arena in his challenger's hometown of Manchester, England.

Linares (42-3, 27KOs) did a masterful job of keeping Crolla on the outside for much of the night, but his ability to lull his opponent on the inside led to the bout's lone knockdown. A picture-perfect left uppercut split the guard of Crolla, who wobbled and hit the deck midway through round seven.

To his credit, Crolla (31-6-3, 13KOs) battled back as hard as he could, enjoying a strong surge in rounds eight and nine. It was as good as it would get for the former lightweight titlist, who took a beating down the stretch to the point where it was debated by his trainer Joe Gallagher as to whether or not to allow his charge to go out for the 12th and final round.

Crolla was afforded the opportunity to go out on his shield, but suffers his second straight loss following a more competitive effort in conceding his title to Linares in their thriller last September.

Up next for Linares is a mandatory title defense versus unbeaten Miguel Angel "Mikey" Garcia, which will make for interesting bedfellows. Linares is co-promoted by Oscar de la Hoya's Golden Boy Promotions, while Garcia is the centerpiece of Richard Schaefer's newly formed Ringstar Promotions. Schaefer, of course, used to run Golden Boy Promotions before his forced resignation in 2014.