Helenius, Chisora Ready To Run It Back May 27 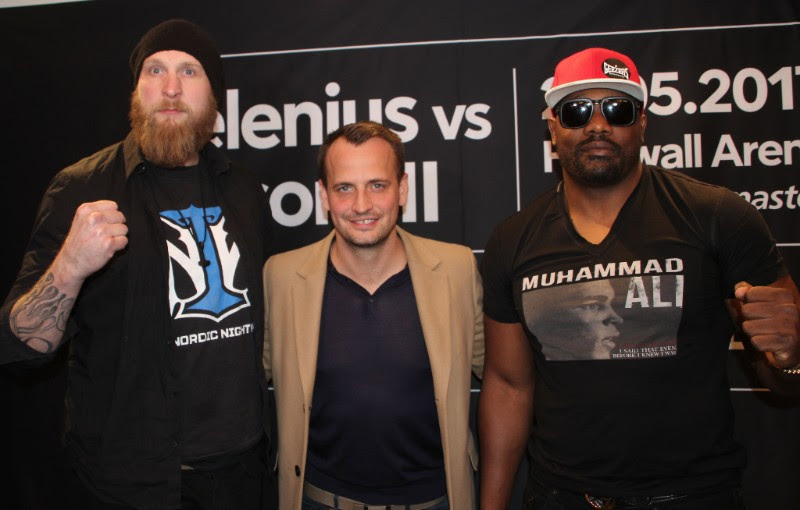 More than five years after their heavyweight clash ended in controversy, Robert Helenius and Dereck Chisora are finally ready to run it back.

The pair of heavyweights met in person on Friday for the first time since their Dec. '11 showdown to formally announce their rematch, for which they will contend for the right to become the mandatory challenger to the winner of the currently negotiated title fight rematch between Deontay Wilder and Bermane Stiverne. Helenius-Chisora II take place May 27 at the Hartwall Arena in Helenius' hometown of Helsinki, Finland, returning to the scene of the crime of their first meet.

Helenius was unbeaten at the time of their Dec. '11 showdown, claiming a highly questionable 12-round split decision dubbed by many boxing outlets as the biggest boxing robbery of that year. Karma ultimately corrected the situation, as the Sweden-born heavyweight has since been plagued by inactivity due to injuries and contract disputes, while Chisora (26-7, 18KOs) went on to secure a title fight and several other lucrative opportunities.

However, the brash Brit came up well short every time stepping up in clash. He dropped a competitive but clear decision to then-heavyweight titlist Vitali Klitschko in Feb. '12, a fight sadly best remembered for Chisora's disgraceful pre-fight and post-fight antics, the latter setting up his next ring adventure. He slapped Klitschko across the face during the staredown following their pre-fight weigh-in, and then engaged in a glass-breaking brawl with David Haye during their wild post-fight press conference brawl.

The matter set up a nearly unsanctioned bout between the domestic rivals, with Haye stopping Chisora in five rounds. Chisora is 11-3 in subsequent bouts, but is coming off of a points loss to Dillian Whyte in their heavyweight thriller last December.

Still, there was no hesitation whatsoever when presented with the opportunity to avenge the past loss to Helenius.

‘’I don’t think Robert took me seriously last time,’’ said Chisora. ‘’But this time he will need to train harder than ever. I’m going to take him to places he has never been before, and I’m going to stop him. I’m not playing around. This guy is in trouble. When I come back to Helsinki, I’m going to be in war mode.’’

Helenius (24-1, 15 KOs) has hardly lit the boxing world afire since the aforementioned victory over Chisora. In fact, he nearly torched his own career, with five subsequent wins spray-painted over a four-year stretch plagued injuries, contract disputes and even a brief retirement. The bottom appeared to come out in a 6th round knockout loss to divisional trialhorse Johann Duhaupas last April, but the 33-year old has since rebounded with a pair of knockout wins.

Given his level of opposition throughout his career and the manner in which his ring rival has competed since their first fight, it can easily be argued that this version of Chisora is the biggest test of Helenius' troubled career. For whatever it's worth, he seems well aware and game to the task.

‘’I’m looking forward to this fight,’’ said Helenius. ‘’Dereck is a tough fighter and I think we will put on a great show for the fans. My hand was raised after our first fight and I can’t see any other outcome this time. This is a big opportunity for me. A victory will bring me closer to a World title fight, and that is my goal.’’

Given their history as well as the stakes, event handlers easily saw the opportunity to bring the two together one more time as a no-brainer.

‘’This is going to be the biggest fight on Finnish soil in recent history,’’ said promoter Nisse Sauerland. ‘’It’s a fight that’s been six years in the making, and we’re delighted to be back in Helsinki and back at the Hartwall Arena.’’