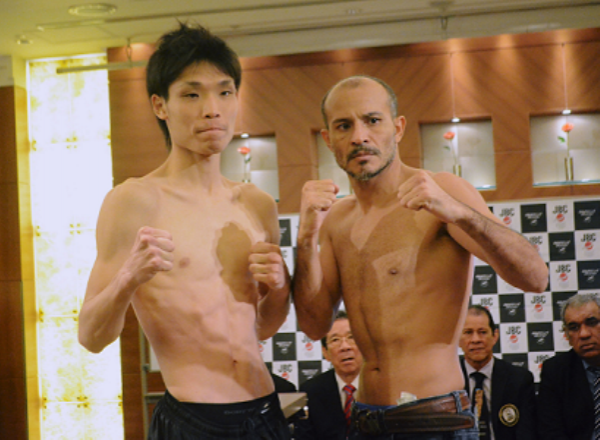 It was a development that didn't come overnight but deep into what may his final title fight - but Nehomar Cermeno ultimately learned that nobody beats Father Time.

The 37-year old boxer became a former two-division titlist as Shun Kubo celebrated his 27th birthday in style, rising from the canvas to force an 11th round stoppage in a major upset Sunday afternoon in Osaka, Japan.

Cermeno - born in Venezuela but who lives in and fights out of Panama City, Panama - floored Kubo in round seven, an instant that proved to be his last great moment in the spotlight as he quickly faded over the next three rounds before opting to not come out at the start of round eleven.

The shocking nature of the stoppage was its timing as it was a largely competitive affair throughout. Kubo jumped out to a strong start but his youthful presence slowly gave way to Cermeno's experience. The Japanese southpaw enjoyed a significant edge in size, speed and strength, but still lacks overall ring smarts and perhaps durability. Cermeno picked up on this in swinging momentum in his favor in round four, though it required his all but giving away the first three rounds to get to that point. He also suffered a cut on his cheek but disregarded the blood as he was beginning to dial in with his right hand.

Kubo was persistent in his body attack, undoubtedly what led to Cermeno's ultimate downfall. However, it left him open for a little chin music as Cermeno rallied late in round seven to put his younger foe on the canvas for the bout's lone knockdown. Kubo beat the count but was forced to ride out an unmerciful rally from the veteran boxer in the final 30 seconds of the right.

It could have very well served as the final great moments of an overachieving career.

Kubo struggled out the gate at the start of the 8th round but by the midway point had permanently seized control of the action. Cermeno was still in pursuit of a knockout finish, but the body shots he absorbed early and throughout slowly began to take its toll on the wily veteran.

One last surge came in round ten, as Kubo was able to disguise the pain endured from an uppercut and follow-up right hand from Cermeno. Showing his own ring intelligence, the southpaw clinched himself out of harm's way long enough to clear his head and finish the round on a high note.

The late sequence was enough to ultimately beat the fight out of Cermeno, who stunningly opted to remain on his stool as the bell sounded to signal what was to be the start of the championship rounds.

Instead, it was a changing of the guard as Kubo was declared a technical knockout winner at 0:05 of round eleven.

Perhaps the most heartbreaking development was that one last surge by Cermeno could have allowed him to retain his title. He was ahead 95-94 on one scorecard while trailing by the same tally in the eyes of the other two judges.

Instead, it's by far the biggest win of Kubo's young career, advancing to 12-0 (9KOs) and picking up an interim title in the sequence. With the trinket comes the prize of being granted the winner of the oft-rescheduled title consolidation clash between Guillermo Rigondeaux and Moises Flores, which is now set for June 17 in Las Vegas.

For Cermeno, it's the agony of defeat and the realization that he's an old man in a young man's game. He heads home with his first loss in five years - almost to the day - in falling to 26-6-1 (15KOs). He managed to scratch out a heck of a ring career, one that includes back-to-back points wins over Cristian Mijares in earning his first interim title and an upset victory over then-unbeaten Oscar Escandon in 2013. Even in defeat he proved his worth twice versus the excellent -and then-bantamweight champ - Anselmo Moreno and in a razor thin points loss to Victor Terrazas in a title eliminator.

The bout aired live on Kansai TV in Japan.