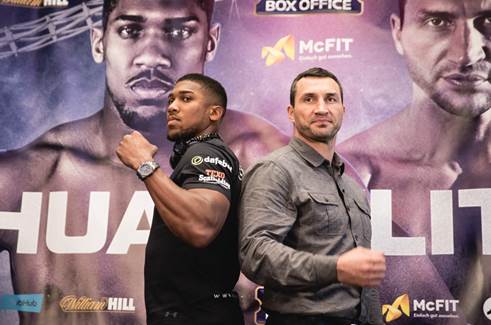 It's fitting that the first time Showtime and HBO agreed to work together (begrudgingly or otherwise) was for what remains the most significant heavyweight bout in the past 15 years, as it took another clash of the titans to bring the pair of American cable giants together.

Whereas there was far too much money to be made from the June '02 Pay-Per-View headliner between Lennox Lewis and Mike Tyson, the April 29 showdown between Anthony Joshua and Wladimir Klitschko came down to both networks being flexible enough with its respective exclusive contracts to each boxer. Weeks of negotiations finally concluded over the weekend, as a joint announcement on Monday revealed that Joshua-Klitschko will air on both Showtime and HBO in live and same-day tape-delay coverage, respectively.

Showtime - which secured U.S. TV rights to Joshua (18-0, 18KOs) last summer - will air the bout live, with stateside coverage to begin 4:15pm ET in allowing the event to air live in primetime on Sky Box Office from Wembley Stadium in London, England. The show will mark the third straight network appearance for Joshua, who made his Showtime debut in emphatic fashion, drilling a disinterested Charles Martin in two rounds to win his version of the heavyweight crown last April.

His upcoming showdown versus Klitschko (64-4, 53KOs) marks the second defense of said title for the 2012 Olympic Gold medalist from Great Britain, who hasn't fought since his Showtime-televised stoppage win over previously unbeaten Dominic Breazeale last June.

"We are thrilled to be delivering Joshua vs. Klitschko to the U.S. audience live on SHOWTIME,” said Stephen Espinoza, Executive Vice President and General Manager of SHOWTIME Sports. “On the afternoon of April 29, U.S. sports fans will be able to tune in to SHOWTIME to join a record-breaking crowd of 90,000 at Wembley Stadium and a worldwide television audience in witnessing an event that represents not only the contesting of the heavyweight world championship, but potentially the changing of the guard in the most influential division in boxing.

"We are proud to be Anthony Joshua’s exclusive U.S. television partner as he attempts to establish his legacy against the legendary Wladimir Klitschko, live on SHOWTIME CHAMPIONSHIP BOXING, as Showtime continues its unrivaled commitment to the sport."

HBO - which has Klitschko under contract - will rebroadcast the event later that evening in primetime via same-day tape delay. The network has been along for the ride for the bulk of Klitschko's near-historic second tour as a heavyweight titlist, whether airing live from his appearances at Madison Square Garden in New York City, or traveling the globe over the course of his nine-year reign that saw title defenses in Germany, Russia and Switzerland.

Overall he has appeared more than 20 times on HBO (along with a couple of performances on Showtime as well), which remains very much in the Klitschko business even after his Nov. '15 title-losing effort to Tyson Fury in his last bout to date.

This one required a considerable compromise by HBO, as it lost out on presenting the action live to its viewers. Still, even in having replayed its own live Saturday matinee later that same evening has consistently delivered equal - if not exceeded - viewership, and is confident that its audience will come around for one of the all-time greatest heavyweights in history.

"Both promoters and both networks have found a solution that enables boxing fans in the U.S. to watch the world heavyweight championship," notes Peter Nelson, executive vice president of HBO Sports. "This agreement ensures that our subscribers have access to same-day primetime coverage of the fight. It will mark Wladimir Klitschko’s 22nd appearance on HBO and the first for Anthony Joshua.”

Both networks will use their own announcing teams, rather than having a combined broadcast as was the case with Lewis-Tyson as well as the historic May '15 clash between Floyd Mayweather and Manny Pacquiao. Fittingly, both shows landed as the highest-grossing PPV events in history at the time of their live airing.

It remains to be seen if Joshua-Klitschko can provide that level of history, but it's already made its mark in terms of box office success. The clash of heavyweight titans will play to a massive crowd of 90,000 paying patrons at Wembley, surpassing the 80,000 in attendance at Wembley for the final fight of Carl Froch's career, an 8th round stoppage of George Groves in their May '14 rematch.