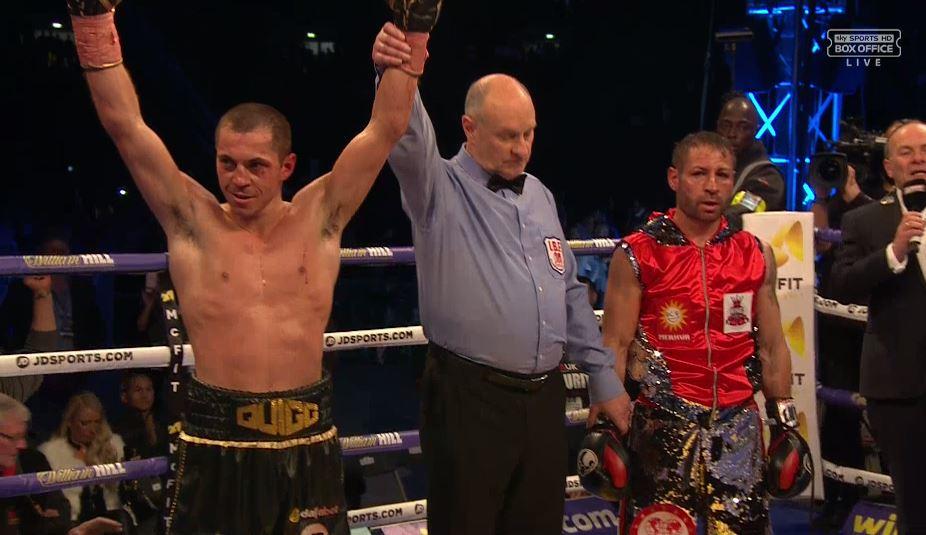 Scott Quigg advanced to the mandatory position for a featherweight title shot after outpointing Viorel Simion over 12 rounds Saturday evening at Wembley Stadium in London, England.

Scores were 117-111 (twice) and 115-113 in favor of Quigg, who fought and won for the second time as a featherweight but in his first fight under the tutelage of Hall of Fame trainer Freddie Roach. The bout served as the chief support to Anthony Joshua's heavyweight title defense versus former World champion Wladimir Klitschko.

There are questions abound as to just how much has changed in the style of the former super bantamweight titlist. who admittedly fought too aggressive and at times one-dimensional. It was still a quality win for Quigg versus a tough opponent in Simion, one of nine boxers on Saturday's show who's competed in the Olympics as he represented Romania in the 2004 Athens Games.

"I knew he was going to be tough and durable," Quigg (33-1-2, 24KOs) told the announcing team for Sky Box Office, whose Pay-Per-View arm presented the telecast live in the United Kingdom. "I thought I'd get him out of there in round nine. I had to work, but it was a comfortable win to be honest."

It was also enough to put him within one win of becoming a two-division world champion. The 28-year old Brit is now in line to challenge reigning featherweight titlist Lee Selby, providing the Welshman gets past Jonathan Barros in their forthcoming title fight.

Whenever that opportunity comes, it will mark Quigg's first title fight since ending his super bantamweight reign following a split decision loss to bitter rival Carl Frampton in their unification clash last February. The setback marked the lone defeat of his career and the relinquishing of the 122-pound strap he successfully defended six times following a stoppage win of countryman Rendall Munroe in their Nov. '12 rematch.

Some have suggested he still needs time to gel with Roach, having switched over to the Hollywood-based cornerman earlier this year after having spent the duration of prime with Joe Gallagher. The boxer will counter that he simply just needs to do a better job of carrying out his instructions.

"I should have used my angles a bit more, but when he's on his back foot he can't do anything," Quigg noted of his performance. "I stood in the pocket a bit too long - Freddie told me to move a bit more."