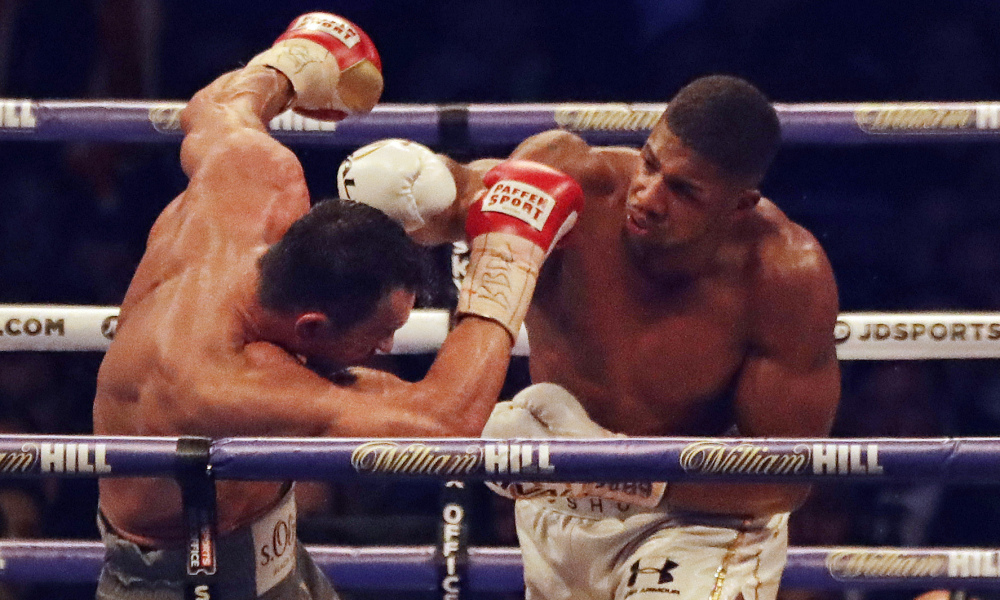 It was already a record-breaking event long before Anthony Joshua and Wladimir Klitschko stepped foot in the ring for their epic April 29 heavyweight encounter.

Everything after that only seems to add to the instant classic.

Arguably the most memorable heavyweight title fight in decades, Joshua rose from the first knockdown of his career to score three of his own in ultimately stopping Klitschko in the 11th round of their unforgettable war in front of a venue record 90,000 fans at Wembley Stadium in London, England. Adding to the record books are the early broadcast returns from around the world. American cable giant Showtime - which aired the event live on Saturday afternoon (4:15pm-6:15pm ET) - averaged 657,000 viewers for the Saturday matinee feature, a record-generating rating for the network's boxing coverage in that general time slot.

It also serves as the second-best Showtime-televised boxing match of 2017, with only Adrien Broner's primetime-televised win over Adrian Granados this past February topping in viewership.

Peak ratings are not yet in but a final number is expected by Tuesday morning, when Nielsen ratings are traditionally released for Saturday cable telecasts. However, the bout's top average quarter-hour rating of 684,000 viewers came during the 5th and 6th rounds (5:15-5:30pm ET), when both boxers hit the deck. Klitschko was dropped hard in round five, but stormed all the way back to arguably turn the round from 10-8 to 10-9. Joshua was gassed and punched out by the end of the frame, leaving himself open for the first knockdown of his career which came in round six.

While such data isn't immediately available, it has also been whispered that Showtime enjoyed record viewership through its live SHOWTIME ANYTIME streaming application. The number of fans who are able to access boxing through its legal online stream are not factored into final Nielsen numbers, which only means that even more viewers were able to take in the action.

The bout was a first in that it aired on both Showtime and HBO, the latter picking up same-day tape-delayed feed later in the evening. The two networks worked together (or at least came to an agreement) to produce joint Pay-Per-View ventures for Lennox Lewis' 8th round knockout of Mike Tyson in 2002 and again in 2015 for Floyd Mayweather's 12-round whitewash of Manny Pacquiao in a massive event that destroyed financial benchmarks.

Both events were record-breakers at the time they happened, which makes it fitting that their latest collaboration - the first time the two worked together for a non-PPV event - is also one establishing viewership bests, at least on the Showtime side.

HBO expects to have final ratings data by Tuesday morning.

Elsewhere around the world, it was reported that RTL in Germany - with whom Klitschko has enjoyed a longtime relationship - drew an estimated 10 million viewers. Sadly for the nation's favorite adopted son, it was his second consecutive loss after having reigned as World heavyweight king for more than nine years. The hulking Ukrainian was fighting for the first time since a Nov. '15 points loss to Tyson Fury to end his title reign.

Joshua (19-0, 19KOs) made the third successful defense of the title he claimed in a two-round blitzing of Charles Martin last April. Saturday's affair marked the first time he'd even been past seven rounds in a prizefight, but the 2012 Olympic Gold medalist from England has yet to be extended the full distance.