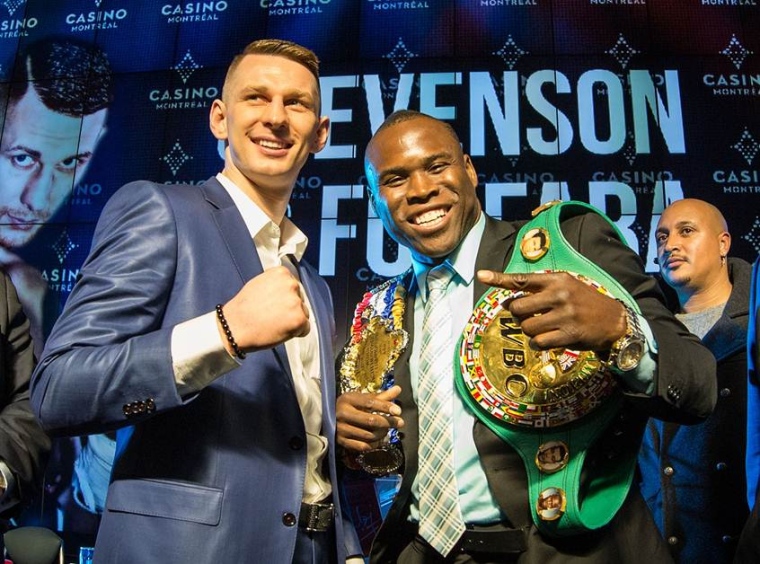 Headlining the show, reigning World light heavyweight king Adonis Stevenson looks to make the eighth defense of his crown as he faces Andrzej Fonfara in a rematch of their May '14 battle. Stevenson (28-1, 23KOs) tipped the scales at 173.6 pounds, right around the same weight for his previous win over Fonfara, who checked in at 173.2 pounds for the sequel - roughly 1/2 pound lighter than his first world title shot.

Their first meet saw both boxers hit the deck, but with Stevenson ultimately prevailing by unanimous decision. The bout was his first after leaving behind HBO and with it a planned unification showdown with then-unbeaten light heavyweight titlist Sergey Kovalev. The now 39-year old southpaw has struggled to shake loose the ridicule and scorn that has come with his time served under adviser Al Haymon and his Premier Boxing Champions circuit, as his title reign hasn't exactly focused on facing the best in and around his weight class.

That said, the former student of the late, great Emanuel Steward - who still trains at Kronk, now under the watchful eye of the very capable Steward disciple Javan 'Sugar' Hill - is coming off of perhaps his best performance since winning the title in a 1st round knockout of Chad Dawson four years ago. Stevenson was last seen drilling Thomas Williams Jr. in four rounds last July in Quebec City, Canada.

Fonfara (29-4, 17KOs) hasn't exactly set the boxing world ablaze in the aftermath of his stock-raising performance in losing to Stevenson three years ago. He has since won four of his last five, including a shockingly one-sided stoppage win over Julio Cesar Chavez Jr. in their April '15 catchweight clash as well as a thrilling points victory over Nathan Cleverly in their savage 12-round punchathon later that October.

The big 2015 campaign came crashing down with a single blow in his adopted hometown of Chicago last June, where he was iced in one round by Joe Smith Jr. in what was hailed by many outlets as 2016's Upset of the Year. The 29-year old Polish boxer has since rebounded with a 10th round stoppage of Dawson earlier this March, which these days seems to be the best way to get a shot at a light heavyweight title.

With the rematch positioned as the main event, the winner will already know the next opponent in line. The evening's co-feature is a final eliminator for the WBC title at stake (in addition to Stevenson's World [lineal] championship) between unbeaten Eleider Alvarez and former champ Jean Pascal. Both boxers weighed 174.5 pounds for the occasion.