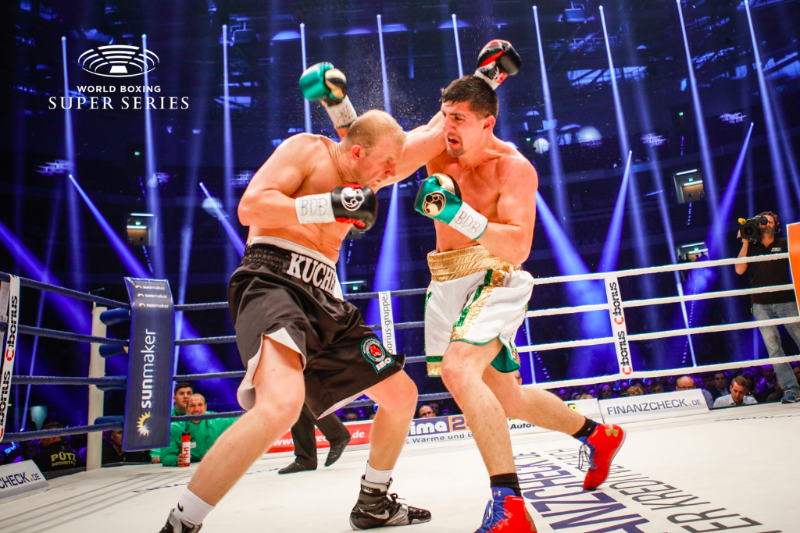 With some of the top cruiserweights in the world already on board for the World Boxing Super Series tournament, it's only fitting that a record-setting titlist joins the field

Marco Huck is the latest to join an already elite level of cruiserweights in the forthcoming eight-man, single elimination tournament, WSBB brass announced Tuesday morning. The former champ—whom shares with Johnny Nelson the divisional record for most successful title defenses—joins fellow former champ Krzysztof Wlodarczyk as well as current unbeaten tltists Murat Gassiev, Yunier Dorticos and his most recent conqueror Mairis Briedis in a loaded field that continues to garner heavy interest with each announcement.

“I am thrilled to be joining the Champions League of Boxing,," said Huck (40-4-1, 27KOs) in a statement released through the WSBB press office. “In the great history of the sport there has never been a tournament like this. Eight world-class fighters will enter the competition but just one man can prevail.

"I cannot wait to show the world that I am best of all those strong champions.”

The 32-year old will have his work cut out for him. He enters the tournament on the heels of a disappointing loss to Briedis in their vacant title fight this past April, coming less than two years after his 11th round knockout loss to Krzysztof Glowacki in their Aug. '15 thriller which saw both fighters down before Huck was dropped and stopped in watching his title reign come to an end as he remains stuck in a tie with Nelson at 13 successful title defenses.

In between the defeats, however, Huck has shown to still have some air in his tires as proven in sound wins over Ola Afolabi—scoring the lone stoppage in their four-fight series to go up 3-0-1 versus his longtime rival—and Dmytro Kucher.

Given the tournament structure and his current status, there is a chance that Huck could find himself in the lower four seeds of the bracket and thus at the mercy of a selection process. The top four-rated boxers in each division—cruiserweight and super middleweight—will have the ability to pick and choose their first-round opponent.

In addition to Briedis ranking amongst the top cruiserweights in the world, rumors have swirled of two more talents potentially joining the field in the coming days—unbeaten titlist Oleksandr Usyk, as well as the man from whom he wrested the title, Glowacki.

Such entries would undoubtedly push Huck further down the queue. He's well aware of that risk—but chasing the very best in the world and the prizes that come with such glory serve as his motivation for entering the series in the first place.

“There are no weak opponents in the tournament, so I don't care whom I fight,” insists Huck. “I want to be the best so I have to beat them all anyway. I don't mind in which order I defeat them.”

Entries for both weight classes are expected to be finalized by week's end, which will pave the way for the formal seeding and selection process. The tournament bracket will be determined during the draft gala, an event which will air live on July 8 from Grimaldi Forum in Monaco-Ville, Monaco.