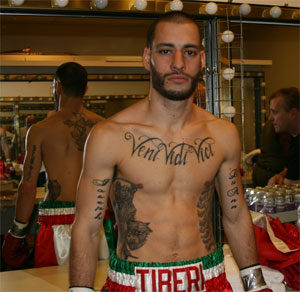 Hockessin, DE (October 24, 2017) - Lightweight Joey Tiberi will square off with Justin Savi in the main event in an eight-round bout for the USBU Lightweight title at the Hockessin PAL in Hockessin, Delaware on Saturday night, November 11th.

Tiberi of Newark, Delaware has a record of 15-2 with eight knockouts.

The 31-year-old Tiberi is on a three-fight winning streak, and coming off a second-round stoppage over Marlon Lewis on June 23rd in New Castle, Delaware.

Savi of Silver Spring, Maryland by way of Cotonou, Benin has a record of 31-14-2 with 21 knockouts.

Savi is coming off a stoppage loss to Jeremy Cuevas on September 22nd in Philadelphia.

In the eight-round co-feature, Lamont Singletary will take on Hafiz Montgomery for the USBU Cruiserweight title.

Singletary of Dover, Delaware has a record of 8-2 with five knockouts.

The 32-year-old Singletary is a six-year professional, who has a win over undefeated Earl Platt (3-0). Singletary is coming off a no-contest with Ernest Reyna on June 23rd in New Castle, Delaware.

Montgomery of Toms River, NJ has a record of 4-1 with two knockouts.

The 36-year-old Montgomery is a two -year professional who is coming off his biggest win when he took a six-round majority decision over previously undefeated Austin Bryant on June 22nd in Durham, North Carolina.

In a six-round super bantamweight bout, Ariel Lopez (7-0, 5 KOs) of Puebla, Mexico will fight against Angel Carvajal (2-7) of Chicago, Illinois.

Shamelle Baldwin will make her pro debut against Chrystal Beyers (0-1) of Ohio in a Welterweight bout.

Michael Crain of Smyrna, DE will make his pro debut against Anthony Woods (0-5) of Douglasville, GA in a middleweight bout.

Maurice Horne (1-0, 1 KO) of Middletown, DE battles an opponent to be named in a light heavyweight bout.

Sonny Duversonne of Orlando, Florida will take on Dino Peralta of The Dominican Republic in a battle of pro debuting middleweights.

Brandon Mullins will make his pro debut in a super middleweight bout against Greg Thomas (1-10) of Philadelphia.

Warris Armany of Queens, NY will make his pro debut against Joshua Cook (0-1) of Newark, NJ in a welterweight contest.