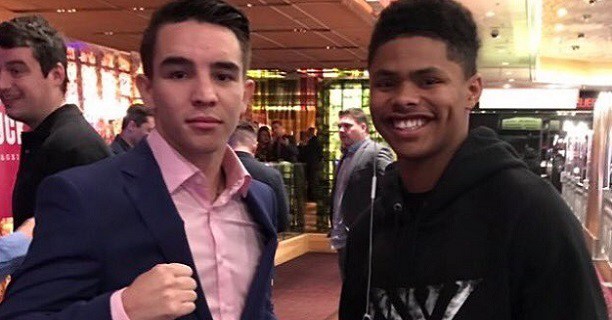 A deep look into the future of Top Rank will be on display for the supporting undercard to the historic December 9 matchup between Vasyl Lomachenko and Guillermo Rigondeaux.

The headlining act at The Theatre at Madison Square Garden in New York City—which sold out almost instantly after tickets went on sale two months ago—marks the first time ever where a pair of two-time Olympic Gold medalists collide in the pro ranks. Their ESPN-televised main event will be primed by a trio of rising prospects and contenders in the Top Rank stable, as the telecast will also include unbeaten prospects and Olympic medalists Michael Conlan and Shakur Stevenson in separate bouts, as well as unbeaten featherweight contender Christopher Diaz.

Prior to the show will come a full undercard to air live on the ESPN app. Among those to be showcased include 2016 US Olympic lightweight Mikaela Mayer and heavyweight contender Bryant "By By" Jennings.

"New York is a market made for Mick, Shakur and Mikaela," said Todd duBoef, president of Top Rank.. "Mick has proven that with his Irish base, Shakur's Newark fan nucleus has spread beyond state and regional borders, and Mikaela's general appeal is limitless. We have curated incredible supporting bouts to this historic night. Every fight is relevant and meaningful. They are all stepping up and on their way to eventually headlining major events at The Garden and other major venues."

Conlan (4-0, 4KOs) made his pro debut at this very venue, scoring a 3rd round stoppage of Tim Ibarra in front of a rabid pro-Irish crowd this past St. Patrick's Day, The two-time Olympian and 2012 Bronze medalist for Ireland has been a knockout every time out in the pro ranks, including a 2nd round stoppage of previously unbeaten Kenny Guzman this past September in Tuscon, Arizona, which also aired on ESPN.

More so than returning to television, the unbeaten Irishman is thrilled to end 2017 at the same location at which his pro career began.

"I’m really excited to go back to The Garden. It’s my first time back since my pro debut and I’m looking forward to putting on another great show for all the fans that are coming too see me, it feels already like it’s my second home," said Conlan. "December 9th is a huge night for boxing and I’m honored to be a part of it."

As history will be made in the main event, it is hoped by the Top Rank brass to create another lower weight rivalry down the road. It was hardly by accident that the Las Vegas-based promotional outfit signed amateur rivals Conlan and Stevenson shortly after the 2016 Rio Olympics. The long term plan is to build both into big enough attractions to where an eventual head-on collision will serve as a true superfight.

There's a long way to go and it requires both to not just remain successful in the pro ranks, but impress to the point of developing into such superstar talent.

For Stevenson (3-0, 1KO), the next step in that journey comes in his second fight on MSG property among his four pro fights as he faces Oscar Mendoza (4-2, 2KOs) in a scheduled six-round featherweight bout. The 2016 Olympic Silver medalist—and the first American male boxer to capture a medal since current heavyweight titlist Deontay Wilder claimed Bronze in the 2008 Beijing Olympics—turned pro this past April, going six rounds in a win over Edgar Brito. Most recently, he claimed another six-round points victory in cruising past David Michael Paz this past August in Lincoln, Nebraska.

Wedged in between is the lone knockout of his career, a 1st round stoppage of Carlos Gaston Suarez which happened to take place in the main room at Madison Square Garden. The already-popular draw from nearby Newark, New Jersey looks to recapture some of that magic as he seeks to end the year on a high note.

"I’m feeling great and ready to perform again at Madison Square Garden. My fight there in May was one of my best so I’m excited to return and outdo my last performance on one of the biggest boxing cards of the year, Lomachenko-Rigondeuax," said Stevenson. "I’m looking to really make a name for myself and put on an amazing performance for everyone at The Theater and all the viewers tuning in on ESPN. Getting the chance to spar with Vasyl Lomachenko, in this camp, prepared me well for this fight and showed me where I am skill-wise, mentally and overall as a boxer. I am ready for anything and I was blessed to have the chance to go out to California and spar with Lomachenko.”

Rounding out the telecast is Puerto Rico's Diaz (21-0, 13KOs), who has stormed into title contention on the heels of two knockout wins in as many fights in 2017. He'll hunt for the hat trick in a scheduled 10-round regional title fight versus Casey Ramos, in a bout where the winner could be looking at a major title shot in the first half of 2018.

Diaz doesn't just plan on securing that opportunity, but making sure he's the boxer the crowd most remembers by night's end.

"On December 9, you will see a more disciplined ‘Pitufo’ -- one that fights intelligently, with more quickness, but above all else, one that fights with a lot of hunger inside the ring," said Diaz. "I have been eating gym for a couple of months and I also ate gym during Thanksgiving. On December 9, I will eat Casey Ramos.

“I have a great opportunity in front of me. This will be the fight and the performance that will launch me to the next level. If Lomachenko and Rigondeaux don’t give the fans the kind of fight they want, ‘Pitufo’ Diaz will steal the show.”

Mayer (2-0, 2KOs) will secure her third straight appearance on ESPN's digital platform as she faces Nydia Feliciano in a matchup scheduled four four two-minute rounds. The 27-year old Los Angeles-based lightweight was blessed with the opportunity to fight for the US in the 2016 Rio Olympics, but was outpointed in the opening round of lightweight competition.

She's yet to leave matters in the judges' hands as a pro—a good thing considering how awful officiating has become in recent times. A two-fight knockout streak has since launched her pro career, but will be put to the test versus the Bronx' Feliciano, whom—despite a less-than-glossy 9-8-2 ring ledger—boasts a cast-iron chin who's never been stopped or dropped in a pro run that includes shared ring time with Heather Hardy, Shelly Vincent, pound-for-pound entrant Amanda Serrano and Jennifer Han, the latter two whom currently reign as champions.

"I’m beyond excited to fight in New York City, not only because I’ll be fighting at the historic Garden but because of the energy I know New York boxing fans are going to bring to the venue. They’re some of the most passionate fans in the United States and I want to give them a great show," said Mayer. "I’m grateful to be with a promoter who sees what female boxers can bring to the table and I thank them for giving me such a stage to perform on. This is where the best of us women belong and I’m ready to show New York my skills."

Also on the non-televised undercard, Philadelphia's Jennings (20-2, 11KOs) looks for his second consecutive win following back-to-back title losses and a 20-month hiatus as he takes on North Carolina's Don Haynesworth.

The bout already marks the 10th title fight in the career of Lomachenko, who captured Olympic Gold at featherweight in 2008 and lightweight in 2012 for his native Ukraine before turning pro late in 2013. His team sought to fight for a major title in his pro debut, an idea that wasn't supported by any boxing commission as he instead faced the still vastly more experienced Jose Ramirez, whom he stopped in four rounds in Oct. '13.

Four months later came his first title shot and the lone loss of his career, a 12-round split decision to Orland Salido whom had lost his featherweight title at the scales due to missing weight and then proceeded to flirt with disqualification during their Feb. '14 scrap. Lomachenko has racked up eight straight wins, including a 12-round decision over Gary Russell to win the vacant title that following June, then moving up in weight to knock out Roman Martinez for a 130-pound belt at this very venue last June.

Along with his eight straight wins comes a current six-fight knockout streak for the 29-year old wunderkind, who now trains out of Oxnard, California and also resides high among most pound-for-pound lists.

Rigondeaux was once regarded as the game's very best boxers, perhaps still belonging among such company. However, it's been a rough past few years for the 2000 and 2004 Olympic Gold medalist for Cuba, who now lives and trains in Miami. He claimed an interim title in just his seventh pro fight, a 12-round nod over Ricardo Cordoba in Nov. '10, before claiming the full version with a 6th round stoppage of Rico Ramos in Jan. '12.

Unfortunately not all of his victories have been as fun as the aforementioned Ramos bout. The defining moment of his eight-year career to date came in April '13, soundly outboxing 2012 Fighter of the Year Nonito Donaire to claim lineal championship status in the 122-pound division. However, the bout was painfully dull to onlookers as was his next title defense eight months later as he went through the motions in a 12-round nod over a disinterested Joseph Agbeko in Dec. '13.

The diminutive southpaw has since fought just five times, one of which was an aborted one-round No-Contest versus Moises Flores this past June. The official ruling was a 1st round knockout, but was successfully appealed by Flores' handlers when it was determined by the Nevada State Athletic Commission that the knockout blow landed after the bell had sounded to end the round.

Regardless, it makes for six defenses of his lineal championship and nine defenses of at least one full alphabet belt. For this adventure, Rigondeaux climbs two weight classes as he looks to become a two-division world champion.