Frampton vs. Donaire Officially Set For April 21 In Belfast 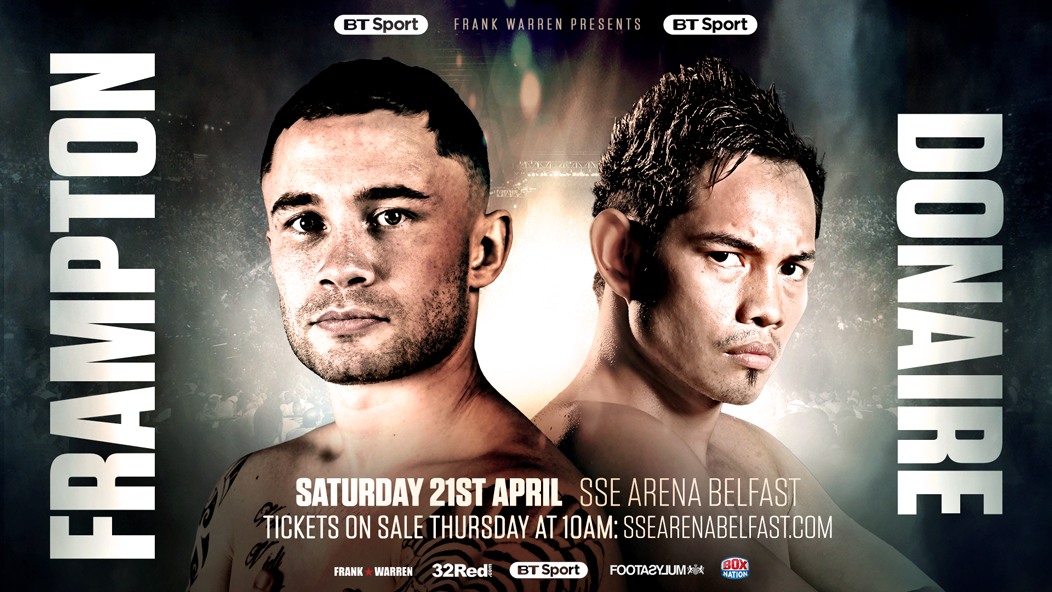 Carl Frampton and Nonito Donaire have long been known as two of the sport's bravest little big men always willing to take on the very best.

No greater proof comes of that statement than their willingness to face one another without anything other than bragging rights at stake.

The worst-kept secret in boxing was made official on Tuesday, as the pair of former champions will collide on April 21 at SSE Arena in Frampton's hometown of Belfast, Northern Ireland. The winner will likely land a shot at one of the reigning featherweight titlists, but it's still a major risk for both boxers without a major belt already at stake.

As pointed out by the fighting pride of Northern Ireland, the similarities are endless between the two combatants. Both have previously nabbed Fighter of the Year honors—Frampton in 2016 and Doniare in a four-win 2012 campaign—and both are former multi-division champions. In fact, Frampton and Donaire each saw their most recent reigns come to a bitter end just two fights ago, while going on to win their lone bout since relinquishing their respective crowns.

Frampton manage a decision over Horacio Garcia last November—also at the SSE Arena—in his first fight since a closely contested points loss to Leo Santa Cruz in their rematch last January.

Donaire's second tour as a super bantamweight titlist ended in a disputed decision loss to Jessie Magdaleno in November 2016, in what marked his last fight with Top Rank. He's since resurfaced with Richard Schaefer's Ringstar Promotions, returning to the ring last September in a points win over Ruben Garcia Hernandez in San Antonio.

Now he gets to stamp his passport for his first career fight in Europe.

“This is exactly the type of fight I live for — going in against one of the best in the World in the lion’s den of his hometown of Belfast,” said Donaire (38-4, 24KOS), a former champ at flyweight, bantamweight, super bantamweight and featherweight. “I can’t wait for the first bell! I know I’ll have to be the best I can be on fight night. Make no mistake, I’m already training like never before.

“I plan to put on a spectacular show for my fans, his fans and boxing fans in general. When I walk out of the ring victorious, it will have all been worth it."

When Donaire first signed with Ringstar Sports, a motivating factor behind the move was the ability to return right back into the title mix. Just two fights into that deal, promises made are promises kept.

This is a fight between two of the best Featherweights in the World, with multiple World Titles between them. These are two fighters who are never boring in the ring, two fighters who come forward and love to engage.

“If styles make fights — well it doesn't get any better than this," stated an elated Richard Schaefer, CEO and founder of Ringstar Sports. "On April 21st it will be ‘Fireworks in Belfast’ and boxing fans from around the World will be in for a treat."

As much was echoed by the event's lead promoter.

"This is a guaranteed barn burner between two elite Featherweights," insists Frank Warren, who signed Frampton to a long-term contract in 2017. "Both men have held multiple World Titles and know that a win will lead to another shot at World glory.

“If Carl comes through this fight then it’s the big one at Windsor Park in the summer next. That is what we promised him and that is what we will deliver if he gets the win in April.”

The local hero is well aware of just how big an "if" that is, especially considering the bravery already exuded by his upcoming challenger.

“Has a bigger ‘away’ fighter ever come to fight in Belfast before?" Frampton notes. "I don’t think there’s been a bigger name than Nonito Donaire and he’s coming to fight a local guy in his hometown. But I think both of us are in the same situation – a slip-up here and one of us might never fight for a World Title again. There’s a lot on the line for both guys.”

The bout will air live on BT Sport and BoxNation in the United Kingdom. US Tv rights will likely be secured, but have yet to be mentioned or even rumored as this goes to publish.

Per the fight announcing press release, tickets for Frampton vs. Donaire are available to purchase from the SSE Arena Belfast Box Office, www.ssearenabelfast.com and 028 9073 9074 from 10.00am on Thursday 11th January.