Saul Juarez Bounces Back With Upset Knockout Of Gilberto Parra 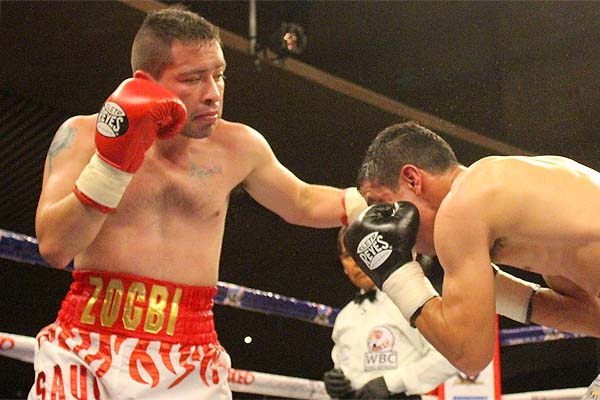 It's been a rough couple of years for Saul 'Baby' Juarez, but the veteran boxer proved there was still plenty of air left in his tires.

Entering on the heels of a three-fight losing streak, the 27-year old junior flyweight breathed new life into his fledging career with an upset 9th round stoppage of rising contender Gilberto Parra. A barrage of punches brought a halt to their Telemundo-televised main event Friday evening at Auditorio Blackberry in Juarez' hometown of Mexico City. Mexico.

As has been a constant theme throughout the spring season of Boxeo Telemundo, Juarez entered facing a must-win situation if he were to remain relevant in the 108-pound division. Having lost three straight, he was tasked with taking on Ciudad Obregon's Parra, who'd won seven in a row following a failed title bid versus then-champ Donnie Nietes in March '15.

Once the opening bell rang, it was no longer about where they've been but where they presently stood on fight night. As it turned out, all Juarez needed was a homecoming.

Each of his past three losses came on the road, dropping competitive but clear decisions to unbeaten strawweight champ Wanheng Menayothin in Thailand; Leroy Estrada last May in Panama; and most recently, a split decision loss to Gilberto Pedroza last October in Haiti. Fueled by the strength of his local faithfuls, Juarez returned to the same form that saw him as a worthy title challenger, putting his extensive ring experience to good use as Parra struggled to maintain pace throughout the contest.

Open scoring (a fringe WBC regional title was at stake) revealed that Juarez was well ahead on all three scorecards after four and eight rounds. It only prompted the aggressive boxer to intensify his attack, beating the heavy-handed Parra to the punch during nearly every exchange and playing to his challenger's desperation attack as his lead extended with each passing round.

The bitter end came in round nine. Parra continued to seek ways to turn things around, but eventually had the fight beaten out of him. Juarez never relented until he was forced to cease his attack upon observation from the referee that Parra was no longer fit to continue.

The official time of the stoppage was 1:57 of round nine.

Juarez turns around his career in a big way as he advances to 24-7-1 (13KOs). The win puts him squarely back into contention, as Parra (26-4, 21KOs) was a leading candidate to land the winner of the upcoming May 25 title fight between defending champ Ken Shiro and former titlist Ganigan Lopez.