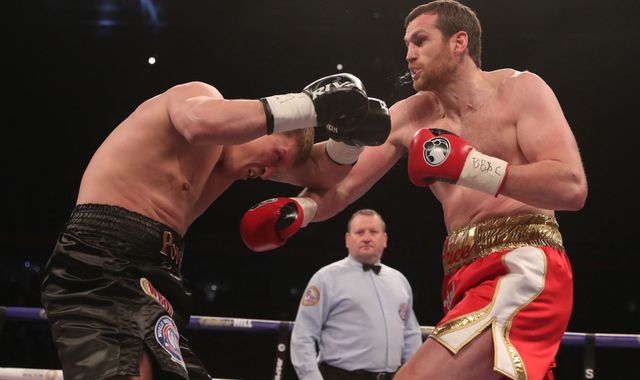 Alexander Povetkin punched his way back into title contention after flattening Britain's David Price in the fifth round of their title eliminator Saturday evening at Principality Stadium in Cardiff, Wales.

Both fighters hit the deck—including their trading knockdowns in round three—before Povetkin ended matters with a right hand, left hook combination to put Price flat on his back in round five.

A slow-moving opening round actually favored Price, a career horizontal heavyweight who landed the most significant punch of the frame—a left hook shortly before the bell—to at least get the attention of Povetkin.

Despite a six-inch height and seven-inch reach differential, Povetkin managed to work his way inside the long range of the 6'8" Price in round two, paving the way for the knockdown festivities soon thereafter. A left hook—Povetkin's weapon of choice throughout the contest—put Price down on the deck in round three, a familiar position for the 34-year old Brit who has been knocked out in each of his previous four losses.

Shockingly, Price not only beat the count but turned the tide towards round end, scoring a left hook of his own to send Povetkin reeling into a corner. The Russian boxer didn't hit the canvas only because the ropes prevented the fall, a sequence which referee Howard John Foster was on point in officially ruling a knockdown.

Povetkin regained his equilibrium as time went on, but not before all but giving away the fourth round. Price was feeling good about his chances, but only proved to be false confidence as his foe would soon send him crashing to reality.

A right hand shot in round five had Price perfectly set up for the final punch of the fight—a perfectly launched left hook to put him down and out for the night.

As for Povetkin (34-1, 24KOs), it's now eight straight wins since the lone loss of his career—a 12-round defeat to then-lineal champion Wladimir Klitschko in Oct. '13—and another title shot looming head. The bout was sanctioned as a final eliminator to the winner of the heavyweight title unification clash between Anthony Joshua and Joseph Parker, serving as the chief support to said contest.

Povetkin previously served as a secondary titlist, losing the title in his consolidation bout with Klitschko. The 2004 Olympic Gold medalist for Russia blew a chance at a second shot at a legitimate heavyweight crown when he tested positive for traces of Meldonium ahead of his canceled May '16 battle versus unbeaten beltholder Deontay Wilder.

Another drug scandal surfaced later that year when Povetkin once again came up dirty, this time ahead of a scheduled Dec. '16 interim title fight versus Bermane Stiverne, who bowed out of the contest and was replaced by Johann Duhaupas whom Povetkin drilled in six rounds. Two decision wins followed before finding the inviting chin of Price.