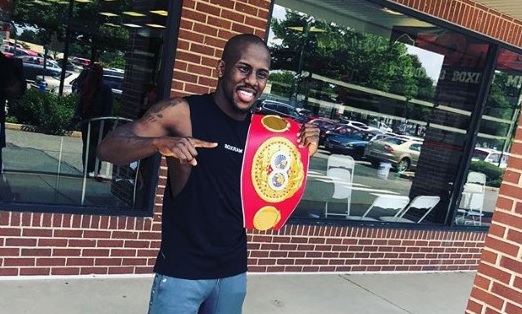 Fresh on the heels of a title-winning effort over Billy Dib earlier this month on the road in Australia, Tevin Farmer not only now has his first defense lined up but marches in with a powerhouse team to boot.

The 28-year old southpaw has entered a multi-fight co-promotional deal with DiBella Entertainment and Matchroom Boxing USA, it was announced Thursday afternoon. Having already served under DiBella's promotional banner, the alignment with Matchroom will now allow his next several fights to be showcased live on subscription-based DAZN's new boxing series.

“Tevin Farmer has a great story but more importantly to me the man can really fight,” said Eddie Hearn of Matchroom Boxing USA, the driving force behind bring big time boxing to DAZN through a multi-year agreement. “He showed great heart to bounce back from that shocking decision (turned No-Contest) in Las Vegas and go to Australia to win the title – and now the world is his oyster."

For once, Farmer (26-4-1, 5KOs) won't have to travel very far for a payday. The newly crowned 130-pound titlist treks a few hours Northeast to Boston, Massachusetts for an October 20 title defense in the chief support to the middleweight tilt between defending beltholder Billy Joe Saunders and unbeaten challenger Demetrius "Boo Boo" Andrade live on subscription-based DAZN.

The opponent will likely be Northern Ireland's James Tennyson (22-2, 18KOs), with those details to be confirmed at a press conference to be held Friday in Boston to formally announce the event.

It's also a rare change in pace of ring activity for Farmer, who returns just two months after winning his belt after having waited more than a year and sifting through two fights just to put the belt around his waist. His first attempt at the crown came last December in Las Vegas, but ended in a horribly scored decision loss that was subsequently changed to a No-Contest after opponent Kenichi Ogawa tested positive for a banned substance.

Nearly eight more months passed by before finally landing an August 3 vacant title bid versus Dib. It required Farmer stamping his passport and traveling to his opponent's home land, but a challenge not even worth batting an eyelash to a man whose career began with a knockout loss amid an abysmal 7-4-1 start and who just last summer was laid up in a hospital bed after suffering a gun shot to his hand.

The boxing lesson delivered to Dib represented years of waiting patiently for his long overdue opportunity.

“Winning that belt after everything I’ve been through brought me indescribable joy,” said Farmer. “I always felt that I was a true champion. I just had to go over to Australia, capture the title and prove it, and I did just that. I came home a champion and celebrated, but I got right back in the gym.

"I want to be an active champion and defend my title. That’s why I’m so thrilled about this deal. It’s a pleasure to work with both DiBella Entertainment and Matchroom Boxing USA and I know that with us working together, big things are going to happen."

Anyone who actively follows boxing Twitter will immediately do a double-take at the new bedfellows in driving Farmer's career.

If nothing else, Lou DiBella—Farmer's longtime promoter—has always been about the best interest of his boxers, which means putting aside petty differences for the greater good.

When it comes to a boxer who has already had to endure so many obstacles just to make it to this point, the man trusted to guide his career continues to make sure nothing else will stand in his way.

“Through all of Tevin’s hard work, heart and determination, he overcame the odds, achieved his dream, and now he can enjoy the fruits of his labor,” said Lou DiBella, President of DiBella Entertainment. “This is a great deal that will help progress Tevin’s career as he begins his championship reign.

Starting with his first title defense in October, Tevin will stay active as we work toward getting him the biggest and most meaningful fights available.”

"Ultimately, my goal is to get all the belts and I’ll do whatever it takes. I’m open to fighting anybody to unify. I’m looking forward to showing the world who Tevin Farmer is and what I can do.”