Bob Arum Believes Pacquiao Would Beat Mayweather in a Rematch 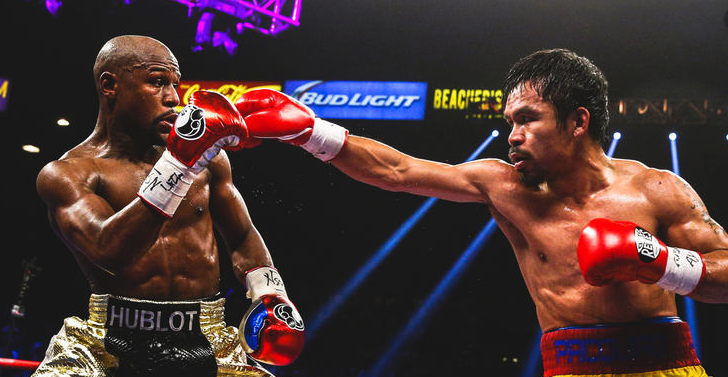 Talk of a Floyd Mayweather-Manny Pacquiao rematch hasn’t died down. Should it happen, Bob Arum believes Pacquiao would beat Mayweather this time round. But if Arum had his way, he would rather see Pacquiao retire. According to Arum, it is the right time for Pacquiao to walk away, as a champion.

This is not the first time Arum has picked Pacquiao over Mayweather in a rematch. The promoter did the same back in 2016 in an interview with Filipino news site Rappler. In that interview, Arum stated his belief that Pacquiao could have won the first fight. “I thought it was a very close fight,” Arum said. “I thought Manny could have won that fight.” In case a rematch happens, Arum offered a guarantee: “When they fight again, if they fight again, I have no doubt that Manny will win.”

Pacquiao and Mayweather fought in May 2015. The American won via unanimous decision. As usual Mayweather approached the fight in a very tactical manner. He used his elusive defense to frustrate Pacquiao, and was content slipping jabs and hooks. The Filipino, on the other hand, looked reserved for much of the fight. He only threw 429 punches over 12 rounds, which is approximately 300 fewer than normal.

One reason for this is that Pacquiao was nursing a shoulder injury. Arum, unsurprisingly, referenced it in picking Pacquiao to win the rematch. “Let’s see Manny with a fully healed shoulder,” Arum said. “I think Manny would give a lot better account of himself in that fight.” Then again, that would be dismissing Mayweather’s defensive tactics, which effectively neutralized Pacquiao’s attacking style. But that does not mean Arum is completely wrong either, especially if the rematch happens soon.

Pacquiao may have a much better chance against Mayweather this time around. The senator continues to fight on a regular basis, and remains ultra-competitive. Since losing to Mayweather, Pacquiao has beaten some excellent welterweights, notably Timothy Bradley, Lucas Matthysse, and Adrien Broner. He recently handed Keith Thurman his first professional loss to take the WBA super welterweight title. Pacquiao was much more active this time around, throwing 686 punches and landing 195 (28%). If he were to repeat those statistics he could potentially overwhelm the defensively minded Mayweather. Marcos Maidana in his first fight with Mayweather proved as much. The hard-hitting Argentine threw 858 punches, and landed 221, in a disputed majority decision loss that many thought he should have won.

In contrast, Mayweather keeps taking these “money” fights — that offer the American (very) low risk but (extremely) high rewards. Case in point was his superfight with Conor McGregor in August 2017. It was billed as a superfight, but was more like a moneymaking exhibition. McGregor may be a world-class mixed martial artist, but he isn’t a seasoned boxer. Yet the matchup proved to be a spectacle, ultimately landing 2nd in Sportsbreak’s highest-grossing pay-per-view boxing matches of all time. Both fighters were more than rewarded for their efforts, too. Mayweather, in particular, was handsomely paid for what he called “easy work.” Who Are the Highest Earning Sports Stars’ by Ladbrokes includes Mayweather, as he earned $258.31m from his fight with McGregor — not bad for a fighter coming off a two-year layoff. Mayweather continued his “comeback” on New Year’s Eve. This time, the American fought kickboxer Tenshin Nasukawa in a three-round exhibition that lasted one round. Mayweather reportedly earned $9 million for even easier work.

The fact that Arum sees Pacquiao beating Mayweather in a rematch isn't surprising. He was, after all, Pacquiao's former promoter. Not to mention, the Filipino has shown that he is still among boxing’s elite. Where Mayweather stands is a bit harder to gauge, as he has refused to take on top-level competition. The only way to know for sure is for the two Hall of Famers to fight again. It could happen, as Mayweather has not denied the possibility outright. Pacquiao, meanwhile, wants a rematch bad. All that is left now is to make the rematch happen.