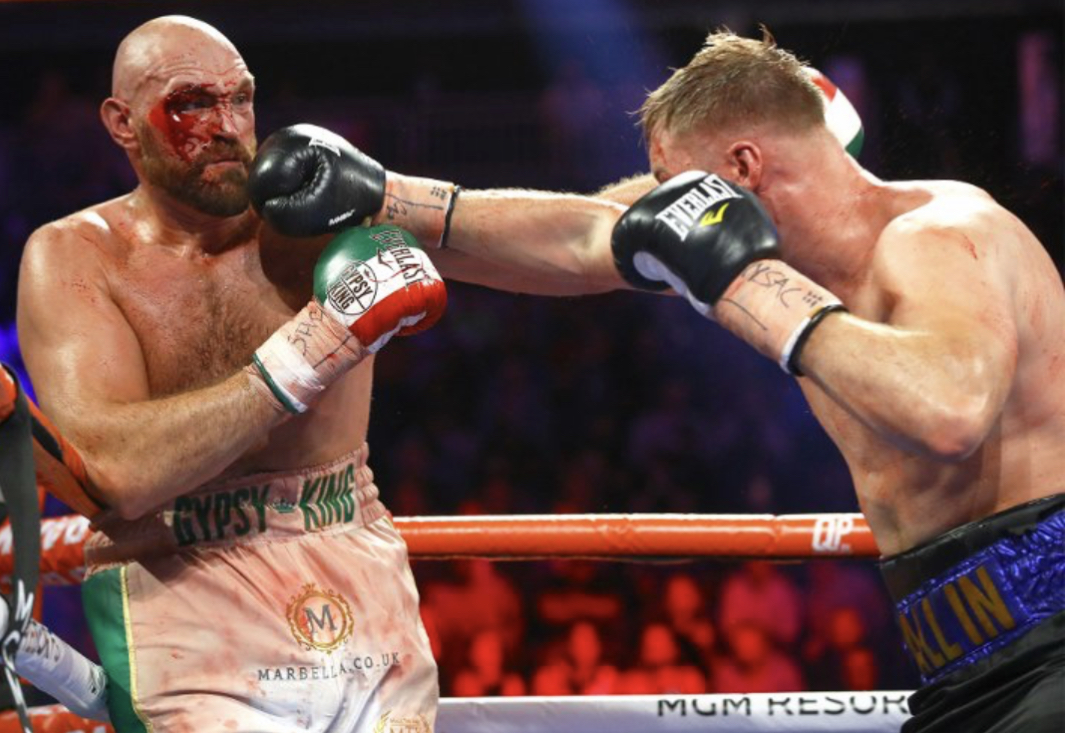 LAS VEGAS -- Tyson Fury survived two bad cuts over his right eye and a gutsy effort from Otto Wallin to win a unanimous decision before 8,249 in the main event of the Top Rank Boxing on ESPN+ card on Saturday night at T-Mobile Arena in Las Vegas.

FightNights.com also had it 116-112 for Fury, who retained the lineal heavyweight title for the fifth time.

"It was a good performance. I got a good 12 rounds in," Fury said. "It was a great fight. I got cut (in the third round) on the eyelid and changed the fight completely. I couldn't see out of the eye, and there was a lot of (head) clashes. I am the 'Gypsy Warrior,' and this is Mexican Independence Day! Viva Mexico!"

Wallin, who was fighting in honor of his late father, Carl, who passed away from a heart attack in May shortly the fight was officially announced, elevated his stock in defeat.

"I did everything I could. I tried my best, and Tyson is a great champion," Wallin said.

Fury also offered his condolences to Wallin for his loss, but also gave him props for a performance that tested him to his limits.

"Congrats to Otto -- and God bless his father and let him rest in peace," Fury said. "He would be very proud of Otto's performance. The Viking Warrior!"

The 6’ 9” Fury used his long jab to connect on Wallin early, but the Swede woke up Fury halfway through the round with a left hand.

Fury had a good second round as he forced Wallin back with a clean right hand. However, things changed drastically in the third round.

Wallin (20-1, 13 KO’s), a southpaw, has an excellent fourth round. Wallin also got a little dirty. When referee Tony Weeks called for both fighters to break, Wallin used the side of his glove to take a swipe at Fury’s bad cut. An understandably infuriated Fury, now sporting two awful cuts, continued to take punishment as blood flowed down the side of his face.

Wallin wished he had done more to expose the cut.

"I tried to hit it even more," he said. "I know it was a punch that did it. I was happy that he was cut, but I wish I could have put more pressure on it."

Weeks called timeout late in the fifth round to have the ringside doctor take a look at Fury's cuts. Fearing the bout could be stopped at any moment, Fury went all-out and Wallin obliged. In the seventh round, Fury drilled Wallin into the ropes with a clean right hand, but Wallin responded in kind and clinched.

Fury, 31, of England, who did not fight in 2016 or 2017 due to a myriad of personal problems, including drug and alcohol abuse, as well as mental illness, continued to push forward in the eighth round as blood continued to flow. He whacked Wallin with a right uppercut that forced him to the ropes.

It was the turning point of the fight.

Fury started to land at will and by the end of the ninth round, Wallin’s left eye was a swollen mess. Fury hurt Wallin throughout the 10th round and had the ballsy contender hurt on the ropes.

Fury continued to punish Wallin in the 11th round, but he somehow stayed on his feet.

A motivated Wallin connected with a clean left hand to open the 12th round and followed up with a quick flurry that bothered Fury, who tied up Wallin, and wiped more blood from his badly damaged right eye. They brawled to the bell in a memorable clash.

According to CompuBox, Fury landed 179 of 651 punches (28 percent) and Wallin connected on 127 of 334 punches (38 percent). Wallin landed more punches on Fury than any opponent in his 15 bouts tracked by Compubox.

Fury did his part and earned a rematch with WBC champion Deontay Wilder (41-0-1, 40 KO’s), who he fought to a much-disputed split draw last December. However, Wilder will also have to earn a victory before their next rumble. Wilder is expected to face “King Kong” Luis Ortiz in a rematch slated for Nov. 23 in Las Vegas.

"Deontay Wilder, I want you next, bum! It is all preparation," Fury said. "I had a long time out of the ring. Next is the big boy, the big 'Bronze Bomber' on Feb. 22."