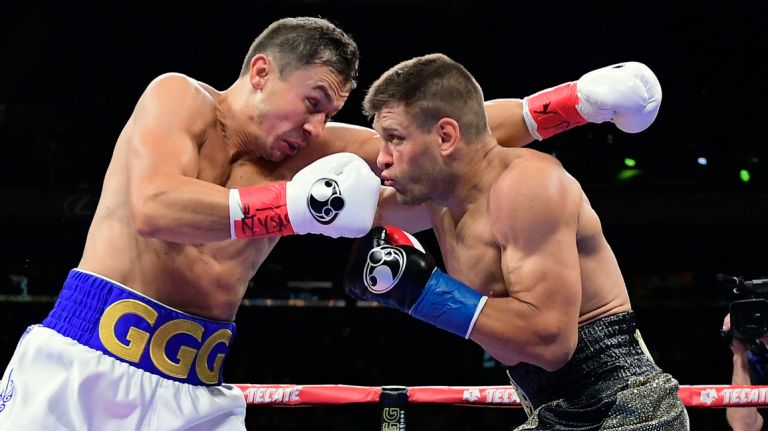 NEW YORK — Gennadiy Golovkin looked every bit of his 37 years, but he still managed to have his arms raised in victory.

Sergiy Derevyanchenko gave Golovkin the toughest test of his Hall of Fame career in an instant classic on Saturday at Madison Square Garden, but it was Golovkin who regained the vacant IBF middleweight title in a brutal war.

Judges Frank Lombardi and Eric Marlinski both scored the fight 115-112, and Kevin Morgan had it 114-112 for Golovkin, who dropped Derevyanchenko in the first round but struggled with Derevyanchenko's relentless pace for much of the fight. FightNights.com scored the fight 115-112 for Golovkin, who has two consecutive bouts since losing a majority decision to Canelo Alvarez last September.

Golovkin (40-1-1, 35 KO's) and Derevyanchenko (13-2, 10 KO's) brutalized each other with vicious punches to the head and the body in a surefire Fight of the Year candidate.

Golovkin floored Derevyanchenko in the first round on a delayed reaction to a left hand and opened a cut around Derevyanchenko’s right eye with a sharp left hook in the third round. Derevyanchenko, though, rallied to hurt Golovkin to the body and gave the Kazakh the fight of his life.

"He hit me in the back of the head. He hit me behind the ear. I didn't really see the punch, but it didn't really affect me that much," Derevyanchenko said. "I got up and I wasn't really hurt, so I continued to fight, so it was nothing, nothing too bad."

Derevyanchenko clearly hurt Golovkin with a left hook to the body in the fifth round. He went after Golovkin, but one of his shots prior was below the beltline, and referee Harvey Dock temporarily halted his momentum to warn him.

Golovkin knocked Derevyanchenko backward in the final minute of the sixth round with a hard right hand, but Derevyanchenko came right back, and landed his own left hook.

Derevyanchenko got off to a great start in the seventh round, nailing Golovkin to the body with a left hook and an overhand right in the first minute. Derevyanchenko did an excellent job throughout the fight of cutting the ring off and not allowing Golovkin to use his 37-year-old legs to create distance.

The eighth round was another close one. Golovkin got Derevyanchenko's attention with a hard right to the body, but the Ukraine native landed a left hook upstairs prior to the conclusion of the frame.

Golovkin appeared to have momentarily hurt Derevyanchenko with a huge right uppercut that snapped back Derevyanchenko’s head just moments into the ninth round. However, Derevyanchenko, bouncing on his toes, bobbing and weaving, landed some vicious body and head shots that forced Golovkin to step back.

Two left hooks by Derevyanchenko early in the 10th round woke up Golovkin, and he retreated. Golovkin and Derevyanchenko then went back and forth in one of the most action-packed rounds of the year.

"When I started moving, I felt like I was giving him room, and I was getting hit with those shots that he threw -- and that's why I started taking the fight to him and getting closer and not giving him room to maneuver," Derevyanchenko said.

Derevyanchenko had a tremendous 11th round, as he tattooed Golovkin to the body with left hooks and crisp rights to the head.

Both fighters fought aggressively to start the 12th, as if they knew they needed a knockout to win the fight. Just like the previous 11 rounds, Golovkin and Derevyanchenko traded leather until the final bell to the roar of the fans.

Golovkin did not act as if he had won the fight.

"I want to say thank you so much to my opponent. This was a great job. I respect his team. I told you, he's a very tough guy," Golovkin said. "This is huge experience for me. Right now, I understand I need more focus [on] boxing. This was a tough fight. I need a little bit more. I need to still get stronger in my camp. Just more serious. I need to work hard. I need a little bit more focus.

"Right now, it's bad day for me; it's a huge day for Sergiy, his team. This is huge experience for me. Right now, I know what I need exactly. I lost a little bit of focus. Sergiy was ready. I really respect him. He showed me such a big heart. I told him, 'Sergiy, this is (the) best fight for me.' I just respect his team."

Golovkin also said that he would be willing to give Derevyanchenko, who some at ringside thought had won the fight, a rematch.

"Absolutely. Big fight for DAZN, for the people, of course I'm ready," Golovkin said. "I'm a boxer. I'm ready for anything."

Golovkin said he also would still like a trilogy bout with Alvarez, but Canelo is climbing up two weight classes to challenge light heavyweight titlist Sergey Kovalev on Nov. 2 at MGM Grand.

If Alvarez maintains his current attitude of being disinterested in a third bout, Derevyanchenko may get another shot.

"Absolutely, I'm just open to anybody," Golovkin said of a third fight with Alvarez, against whom he fought to a heavily disputed draw most thought GGG won in 2017 and a disputed majority decision loss in the 2018 rematch that ended his first 2010 to 2018 title reign. "There are so many great champions here. Sergiy, a lot of guys. Everything is ready. Just call Canelo. If he says yes, let's do it."

Count Derevyanchenko on board for the second war.

"I would like the rematch if it's possible," Derevyanchenko said. "I'm ready."