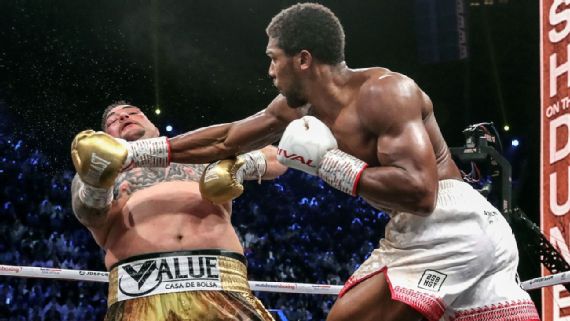 Anthony Joshua promised to be better, and he overachieved.

Anthony Joshua avenged the only loss of his professional career and regained three heavyweight world titles by scoring a lopsided unanimous decision over Andy Ruiz on Saturday at Diriyah Arena in Diriyah, Saudi Arabia. The official scores were 119-109, 118-110 and 118-110. FightNights.com scored the bout 117-111 for Joshua, who became a two-time heavyweight world champion.

Joshua (23-1, 21 KO's) boxed beautifully from the outset behind his jab and kept Ruiz at bay for most of the fight. The Mexican-American had his moments, but Joshua's superior movement proved to be a puzzle for Ruiz, who weighed-in for the fight at 283.7 pounds.

“The first time was so nice, I had to do it twice” said Joshua. “This was about boxing. I’m used to knocking guys out, but last time I realized, I hurt the man and got caught coming in. I gave the man his credit, but I said I was gonna correct myself and come again.”

Joshua drew first blood at the start of the fight, connecting wit ha sharp right hand that cut Ruiz to the side of his left eye.

Ruiz had some success near the end of the fourth round when he landed a series of punches to the head and body of Joshua. However, he couldn't muster up the same energy in the fifth frame. Joshua went right back to business, popping Ruiz and keeping the larger man at distance with his jab. Joshua was polishing a masterpiece.

In the seventh round, Joshua closed the gap and started to exchange with Ruiz, a dangerous tactic considering what happened in their first meeting.

In June, Joshua dropped Ruiz to the canvas in the third round, but was subsequently dropped twice in the same round after getting caught coming in. Ruiz ended up knocking down the Englishman twice more in the seventh round to earn the stoppage in a huge upset. Tonight, however, was a different story.

Joshua controlled the rest of the fight with ring generalship and supreme boxing.

Ruiz (33-2, 22 KO's), 30, of Imperial, California, admitted after the fight that he did not train like he should have. FightNights.com was warned by sources leading up to the fight that Ruiz's team had complained that their fighter was spending a lot of time eating and wasting money.

“It was his night and I didn’t prepare like I should have,” said Ruiz (33-2, 22 KOs). “I don’t want to make excuses (which is exactly what Ruiz did), but next fight I’ll get more prepared, and work with my team a little more. I was chasing him instead of cutting him down.”

Ruiz is undoubtedly a good fighter, but he could probably benefit with better discipline.