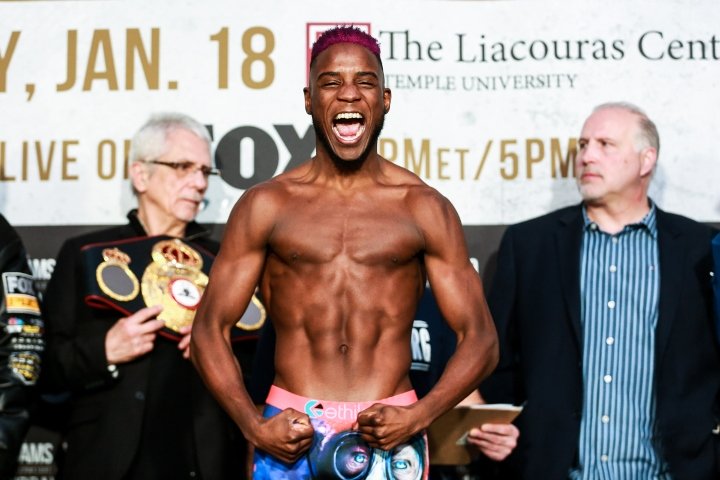 The first step to his goal was accomplished on Saturday. Colbert dominated Jezreel Corrales, outpointing the former junior lightweight world titleholder to become the mandatory challenger to Santa Cruz's WBA "super" title in a unanimous decision. The bout served as the chief support bout to unified 154-pound world titleholder Julian Williams' first title defense vs. Jeison Rosario in a PBC on FS1 televised event at The Liacouras Center in Philadelphia, Pennsylvania, the home of Temple University.

One judge scored the bout 116-111, while two had it 117-110 for Colbert, who became a secondary junior lightweight titlist with the victory. FightNights.com had it a little wider, giving 11 of the 12 rounds to Colbert.

The fight was one to forget. Boos rained down from the crowd throughout. It got to the point that a ringside reporter decided to join in. However, a PBC official warned the individual to cut it out.

"He’s very awkward. He’s slick and fast. It was hard to catch him because he was running, but he came to fight," Colbert said. "I take my hat off to him.

Corrales (23-4, 9 KO's), 28, of Panama, who has lost three of his last four bouts, connected with a decent straight right hand to the body in the fifth round. But not only did it not bother Colbert, Corrales also did not have anything coming behind that punch.

Colbert was in firm command of the action and in the eighth round, he caught Corrales with a left hook, which forced him to clinch.

Meanwhile, the crowd let the fighters know that they did not pay money to watch interpretive dance by incessantly booing.

But in the 10th round, the fans finally had a reason to cheer, as the action, at long last, started to pick up. Colbert dropped Corrales with a left hook. The crowd, though, was still not impressed.

In the 11th round, in an exchange of blows, Colbert threw Corrales through the ropes and out of the ring.

It was all Colbert in the final round, who got the job done against a very experienced, cagey boxer. Furthermore, the boos turned to cheers in the final couple of rounds, an excellent sign for the young prospect, as Philly fans are typically hard to impress.

"I had confidence coming into the fight. I knew I was going to dominate the fight and I told you all that before the fight happened. He was running and I was trying to catch him, so I told my corner, let's have a dog fight. We got 12 rounds. I’m in shape. You see, I didn’t sit down one round. I’m in shape and I came to fight. I wasn’t going to leave without this title.